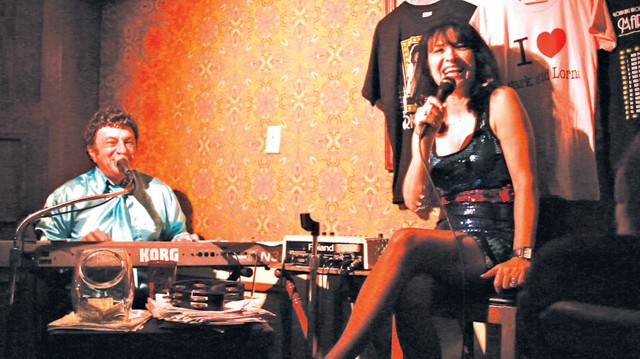 They were ours. The Dresden has its Marty and Elayne, Lake Tahoe its Captain & Tennille, Altadena Middle School its Marty and Bobbi Culp, but Mark Wayne and his wife, Lorna Lambey, were Orlando's designated lounge lizards, and there's great pride to be found in that.
So when Wayne passed away from a heart attack on Valentine's Day this year at the age of 82, the city lost not only a friend but an institution. The duo performed in Florida lounges for more than four decades with Wayne behind the keyboard, Lambey up front or kicking back on a bar stool, tambourine in hand, both smiling through endearingly shambolic takes on "Piano Man," "Dancing Queen" or any number of Rat Pack standards.

There was far too much music in Wayne's soul to be so easily silenced. This week, local musicians and friends pay tribute to Wayne and his surviving partner with a night of raised toasts and what are sure to be thrillingly bizarre takes on Mark and Lorna's favorite covers.
"They were entertainers in the truest sense of the word," says area musician Chopper Stepe. "They performed to make people smile and have a good time. Emulating that seems the best homage to me."

Stepe says he admired the duo's ability to toe the line between cheesy kitsch and the genuine joy of mass musicality.

"They were Orlando's little secret," he says. "Out-of-towners never knew what to expect when you'd take them to see [Mark and Lorna], but they always walked away really happy and had a great night. It was a special thing."

Lambey is expected to be in attendance for the fundraiser, the proceeds of which are intended to offset some of the expenses related to Wayne's passing. Admission is $8, but additional donations are accepted and, considering the local scene's increasingly well-known charitable efforts, certainly expected.

"Orlando has a community spirit within its music scene that I've never experienced in any other city I've lived," Stepe says. "It's really beautiful."