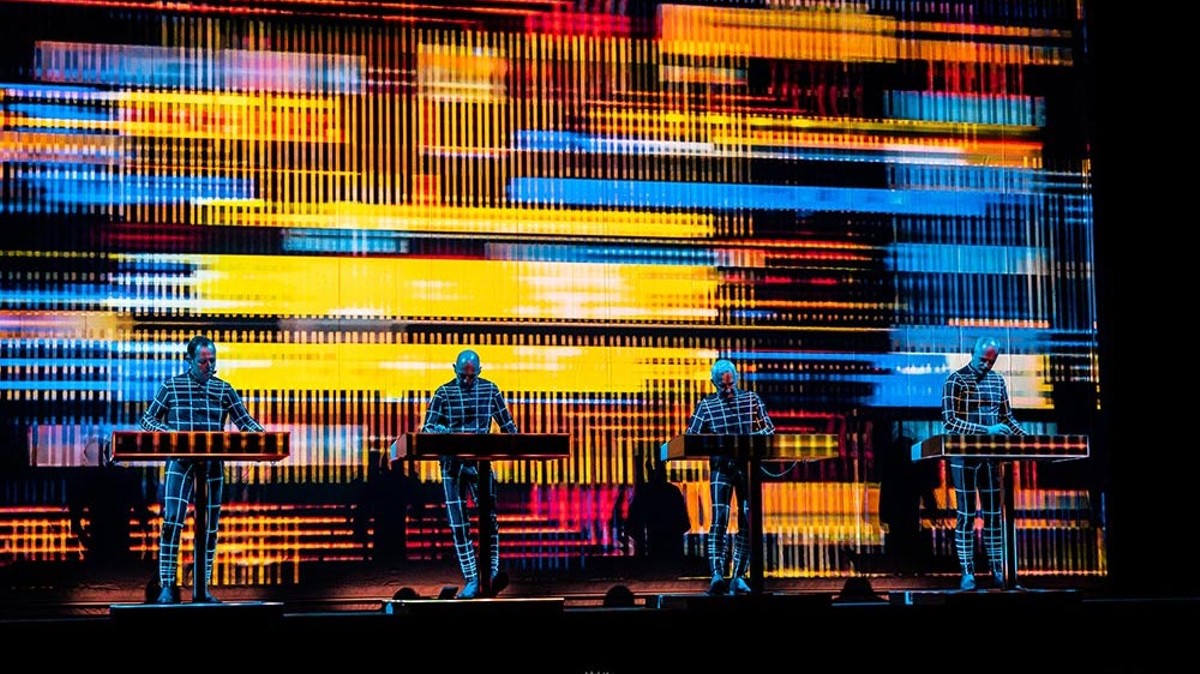 They are the robots: Kraftwerk live photo by Reema Shah, Out of the Dark Photography

When I was in fifth grade, I knew what Kraftwerk sounded like without even hearing them — echoes of their electronic pulse were everywhere in 1982. Synth-pop acts the Human League, Soft Cell and Eurythmics had all invaded the Billboard charts. Even arena-rock bands like Foreigner and Journey studded songs with synth riffs and sequencer blips.

At the same time, teens in New York City were breakdancing to a then-new genre called electro — a mix of early hip-hop with heavy doses of Kraftwerk's synthetic tones. Though not expressly intended for the dance floor, that is indeed where many of Kraftwerk's songs were first fully appreciated: European discotheques, gay nightclubs and impromptu block parties in the Bronx. And why not? Beats and basslines are what we groove to — then and now.

Instead of Kraftwerk's locked-groove rhythms, repetitive sequences and hypnotic melodies inducing boredom, they made you want to move — and dance, dance, dance to the radio.

Nigel John — a longtime Orlando DJ and producer of conceptual electronic music himself as Kurt Rambus — agrees. "I heard 'Numbers' [from 1981's Computer World] for the first time; I'd never heard music like that before. It was very funky, and it was like futuristic. And it had an undeniable beat to it," recalls John. "That turned me on to exploration of different types of music."

Their origins in the German experimental music scene of the late '60s suggest the avant-garde, yet Kraftwerk were agreeable to traditions from their inception; guitarist Michael Rother and drummer Klaus Dinger were core members until 1971 when they departed to form the almost-as-influential Neu!

A willingness to play with form led to their greatest advancement — ditching traditional drums and guitar altogether to go fully electronic — while exploring pop-song conventions. In the mid-'70s, this was a radical concept, if not commercial suicide. Think about it: a band without a guitarist, and with a vocalist who sang through a vocoder in German or heavily accented English. Not very rock & roll.

But that was precisely the point — Kraftwerk wasn't interested in destroying existing systems like punk was. Rather, they imagined building completely new ones with undercurrents of nostalgia and playful humor. And because of this irreverent sensibility, they reached audiences far outside of those who only listened to "angry white dudes with loud guitars." Or jazz fusion.

"I came from a New Age-influenced background — so, Vangelis and Jean-Michel Jarre. In 1991, I got a copy of The Mix [album of remixed Kraftwerk hits]. And then all of a sudden you hear the influence," says Jesse James Allen, an Orlando-based sound designer and electronic musician. "It's extremely obvious where everybody got the idea to do things. And that's when you fall in love with the history of the genre."

Unlike in Europe, electronic music wasn't initially accepted in America. Yet remarkably, an edited version of "Autobahn" from the Kraftwerk album of the same name was released as a single in the U.S. and subsequently reached 25 on the Billboard Hot 100 charts in 1975. A space oddity? Now that you mention it ...

There was a connection between David Bowie and Kraftwerk: a true mutual admiration society. The Thin White Duke admittedly fell in love with electronic music via Kraftwerk, and they directly affected the direction of his work. This influence reached its apex in Bowie's so-called Berlin trilogy of albums — Station to Station, Low and Heroes — released during the late 1970s.

In fact, Bowie named the song "V-2 Schneider" after Kraftwerk's co-founding member, the late Florian Schneider. (Kraftwerk would soon return the favor by referencing both Bowie and Iggy Pop in the lyrics of their anthem "Trans-Europe Express.")

When I finally did hear Kraftwerk in 1986 via The Man-Machine, it was the musical equivalent of watching a victory lap: comfortable and effortless. The group's future-shock aesthetic was blunted only slightly by what I was listening to at the time: Cabaret Voltaire, Depeche Mode and Front 242, all confirmed Kraftwerk acolytes.

Famously sampled by the Chemical Brothers ("Leave Home") and New Order ("Blue Monday"), Kraftwerk's influence is endless-endless. Any producer who locks a beat to a grid to drive their latest banger — regardless of genre or generation — owes a creative debt to the group. But sound design was not the only impact Kraftwerk had on future music. 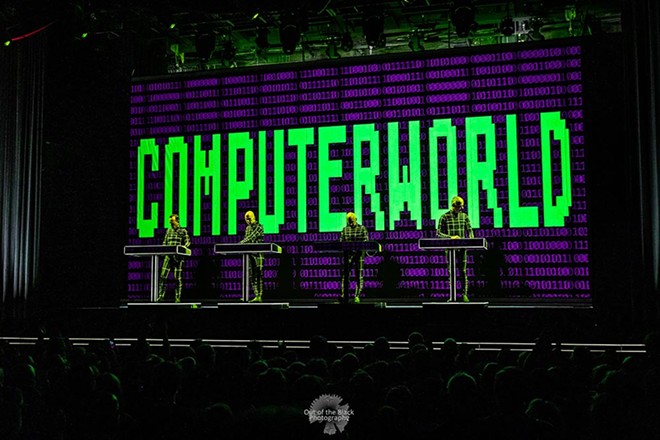 Photo by Reema Shah Out Of The Dark Photography

Their now-iconic visual aesthetic was developed with an eye towards style continuity for maximum impact — including matching uniforms, synchronized robotic stage-movements and dramatic video displays — which alone paved the way for the sensory overload of rave and later, EDM. And apparently, a certain Florida man took note.

"The feelings I got as a kid listening to Trans-Europe Express and thinking about how impossibly cool it would be to travel across Europe in a train; it just seemed like dreaming about another planet or universe," remembers David Sanborn, Central Florida resident and Kraftwerk auteur.

In 2016, Sanborn posted a story with a photo of his driver's license with "Kraftwerk" displayed as the name (relax, he didn't legally change his name). While this digital prank gained some traction online, it was another life-changing event that would make him and his soon-to-be-wife synonymous with the group from Düsseldorf.

When Sanborn married his girlfriend — and fellow Kraftwerk fan — Jennifer Huber in 2017, it wasn't your ordinary wedding (bespoke or otherwise). That's because The Man-Machine theme was honed to a razor's edge — outfits from the album cover, mannequins, artwork and even a Kraftwerk-ian version of the "Wedding March" produced by Q-Burns Abstract Message. "Introducing Mr. & Mrs. Kraftwerk ... "

"I've been having a lot of fun since we had the Kraftwerk wedding of taking their very clear visual directives for colors, forms, shapes and iconography, and mashing that up with things that are largely incongruent," explains Huber. Recent collaborations between the husband-and-wife team include producing Kraftwerk puppets and sky-dancer videos. (Traverse the YouTube Autobahn to find them.)

And with more than a hint of irony, they were also inducted into the Rock & Roll Hall of Fame in 2021. Kids today may not be able to name a Kraftwerk tune, but they sure know what these robots sound like.