Kitty Pryde, Gunpowder Temple, and what it means to "make it" 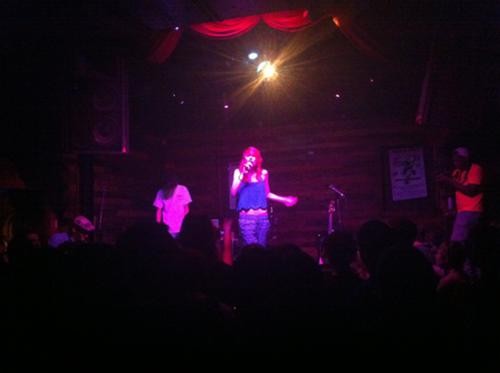 After I posted that item yesterday asking whether Gunpowder Temple was "one of the best bands in Orlando," the response that it got was what I expected, but not quite what I had hoped for. I mean, of course Gunpowder Temple isn't "one of the best bands in Orlando." They're just a bunch of kids who are trying to play music and trying to make it work – just like every other local band everywhere. Even though the whole "modern rock" style they've chosen to pursue is uninspired (and uninspiring), the fact remains that they've made the decision to navigate the treacherous waters of club promoters, media, and whatever weird thing "the music business" is today in the hopes that they'll get a chance to rock out in front of a crowd of appreciative fans. Which means that, unlike about the 90% of the world that exists as passive consumers, the kids in Gunpowder Temple have decided to be active creators. And that's a good thing.

But the way they're going about it just seems all wrong, doesn't it? They've only played a handful of gigs, yet they've got someone doing PR outreach for them (who is surely a fan/friend and not a pro, but still), they've got an electronic press kit (EPK), they've made a video, set up all the appropriate social network/band-fan pages ... but at the end of the day, this is a band that augments their 10 or 12 original songs with System of a Down covers. They're young and unpolished and have yet to settle into a unique or original voice, and still they act as if they're just about to break out. Kinda cart-before-the-horse, yes?

But what they've done is to essentially follow the exact sort of advice that's screamed from every rooftop and SXSW conference panel: market yourself, be professional, harness the power of social media, work hard at getting the gig, try and stand out, look like you deserve it, blah, blah, blah. These kids – who just want to create music and maybe, maybe, get it to the point where they're not losing money in the process – followed the rules. And it just sorta makes them look ridiculous, doesn't it? Like over-ambitious poseurs who decided a fancy EPK was more vital to their success than a clutch of truly inspired and creative songs.

And maybe that's true. Like I said in the previous post, the whole "modern rock" universe that Gunpowder Temple lives in is a weird and foreign one to me that has little to do with rock 'n' roll and a lot to do with emulating a particular musical formula. So, no, I don't like the music they make. But some people do. And lots more people would, once they're exposed to it. And that's good! Because people listening to music they like is always good! So I don't have any issue at all with these kids trying to reach that potential audience. (And please, no bullshit about "Well, those potential fans should be listening to less Shinedown and more Ty Segall" ... shut up, because it ain't gonna happen.)

What I do have an issue with is the notion that anybody actually knows what they're talking about when it comes to how to make it as a musician. Anyone who says they do is lying and probably trying to take your money. Sure, there's lots of advice that people can dispense based on past experiences – for instance, I'd be more than happy to tell you some very very wrong ways to try and get media attention – but from a musician's perspective at least, the way that the music business works today is defined by one thing only: unpredictability.

From scouting and signing bands to marketing and supporting them, every single label does it differently and meets with so many varying degrees of success that trying to extrapolate meaning from the results is pointless. And, on the DIY front, the methods and results are even more disparate. Do you make a Bandcamp page and give away your music hoping for good turnout at your shows? Do you try and get 10,000 Facebook likes and use that to market yourself? Do you harass bloggers? Or purposefully ignore them with the idea that if you're mysterious enough, they'll come to you? Do you put your guitar in the backseat and low-budget-tour your ass off for 11 months out of the year? Do you sell t-shirts? Wristwatches? Limited edition 7-inches? Is there a difference?

Nobody knows. And, again, if they say they do, they're lying and trying to take your money.

Take, for example, the success that Daytona Beach's Kitty Pryde has had. Here's a girl with no discernable talent, but thanks to her trolled-or-not-trolled virality on Tumblr and YouTube, she got Rolling Stone to cover her first show in New York City a few weeks ago. And when she played Back Booth last night, the reception she got was rapturous, with a packed room of seemingly smart and with-it kids there to watch. (And not in an ironic-gawking-at-this-dumb-trainwreck kind of way either.) The set itself was utterly, utterly forgettable, displaying neither technical flair, creative sparks, nor any sort of personality to speak of. I mean, she was rapping over backing tracks ... of her rapping. (Which was actually a wise move, because her voice was so thin and small, it was nearly impossible to hear on its own.) But, again: packed room, kids loving it. She could have sold 100 CDs last night if she gave a shit about selling CDs. But she probably doesn't give a shit about selling CDs.

Kitty Pryde has taken a path to success that exactly zero people ever would have prescribed for a musical act, but there she was, doing exactly the thing that the boys in Gunpowder Temple want to do. And maybe, one day, those Gunpowder Temple kids will get to experience that, but they'll most certainly get there differently than Kitty Pryde did.

That, I guess, is the point of this long-winded thing that nobody's going to read. Just like there are many different ways for musicians to "make it," there are also many different ways to define what "making it" really is. And, more importantly, "making it" is not a zero sum game. Kitty Pryde's success as a rapper doesn't mean that Gunpowder Temple can't make it as a "modern rock" band, or even that 20 more Kitty Prydes can't exist. (God forbid!) And even though you may not like either of them (I certainly don't!), it doesn't mean that their success somehow reflects poorly on your taste. After all, you don't like them! Even if your favorite local band never gets a pixel of Internet attention beyond this humble burg – even if they never get any attention in this humble burg – that doesn't in any way diminish what their actual music means to you as a listener. Sure, success is great, because it allows the bands you love to continue to make music, but success (or lack thereof) doesn't define the quality of the music. There's shitty music that lots of people love, and there's wonderful music that lots of people love. And there's the opposite. And there's everything in between.