Dateline: Austin, Texas. During the 2016 South by Southwest festival, at the height of the music industry insanity, a funeral procession cuts down the middle of Sixth Street; mourners carry a coffin, while a marching band blasts out versions of songs that seem oddly familiar. The casket is spray-painted with a date: 3/25.

And with that, in a gesture befitting a Marilyn Manson or Screamin' Jay Hawkins, Young Thug announced the release date for his latest mixtape, Slime Season 3.

Young Thug, aka 23-year-old Jeffrey Williams from Atlanta, is no stranger to the outlandish and bold. Over the last five years, spread out over 14 albums/mixtapes and innumerable guest spots, he has pushed at the boundaries of hip-hop culture both sonically and aesthetically, testing the limits of the art form while achieving that rare mix of critical acclaim and wide-spectrum audience.

Tobias Grave of Portland's Soft Kill described him recently as "the Lee 'Scratch' Perry of trap music." A co-worker sees him more as a David Bowie type (is that even possible?), calling him "an androgynous space alien."

The takeaway: Young Thug makes no sense, and neither do his fans. He's a gun-lover who sometimes wears little girl's dresses as shirts; when he's not (according to his tourmates and collaborators on background) chasing molly with lean, he's (according to a recent GQ profile) getting house calls from a doctor who gives him vitamin injections "to keep me healthy." His fans span a range from lovers of avant-garde noise to devoted 106 & Park viewers. The one thing everyone agrees on: No one can understand a damn word he's saying.

Producer, DJ and beatmaker (Lil Wayne, Rick Ross) DJ Nasty – currently on tour with Beyoncé, bow down – is sanguine about the Young Thug phenomenon, offering broader context from someone who's seen it all: "America is changing and so is hip-hop. You don't have to be street to be cool. You can be different, and there are a million others who feel just like you. Look at artists like Lil Dicky or Chance the Rapper. ... Young Thug has his own unique sound and style, and most importantly delivers musically. Mixtape after mixtape, he gives fans what they want and you see that represented in the audience he brings to his show." His Power 95.3 colleagues concur. Mz. Marina says, "It's no longer about north, south, east or west in hip-hop ... and it's because of artists like Thug"; DJ Infa Red enthuses, "The way he rides the beat is crazy! He sounds like an instrument."

Conversations and think pieces about Thugger tend to veer off on tangents – his rap beefs (with Future, Plies, the Game, Lil Wayne and Charlamagne tha God, among others), his oft-flamboyant appearance, his elastic usage of language – but all of that aside, his popularity is indisputable. And he's prolific at an astonishing rate, releasing new songs in the blink of an eye. Lyor Cohen, the head of his label, recently accused YT of recording too many songs and not developing them: "[You] leave them like little orphans out there. You have to come back to them." (Thug's reply: "The critics come back to them!")

North Florida writer/musician/screamer AG Davis enthuses about Thug's "totally unpredictable, brash, phenomenally bizarre" flow, concluding: "Young Thug is an anomaly, but he is an explosive one. He just might be single-handedly changing the game, both in terms of what is listenable to under the established rubric of hip-hop, and what is commercially viable as well."

Now hip-hop heads will get the chance to step away from the internet static and judge for themselves as Young Thug crash-lands into Venue 578 this Saturday. Local personality Harry Morall, promoter of Talk Yo Shit at the Social, saw Thug a few years ago in Miami.

"He was relatively unknown at that time but even then he put on a really good show," Morall says. "A-Trak came out and was like, 'You guys are about to see this guy everywhere,' and I was like, 'Hmph, yeah right, everyone says that.'

"But I was schooled that day." 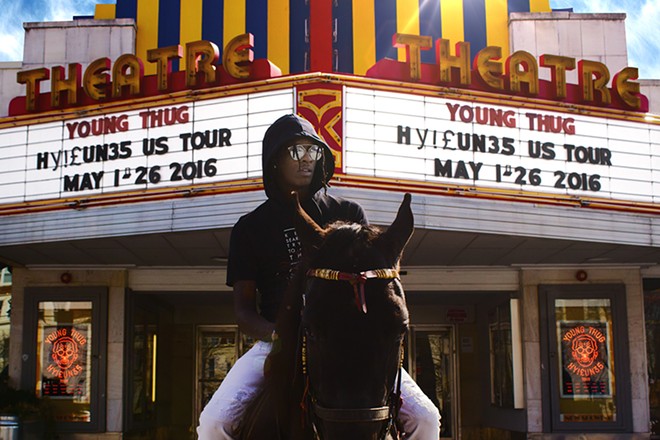