"We were supposed to ruin it in the end," says Kevin Drew 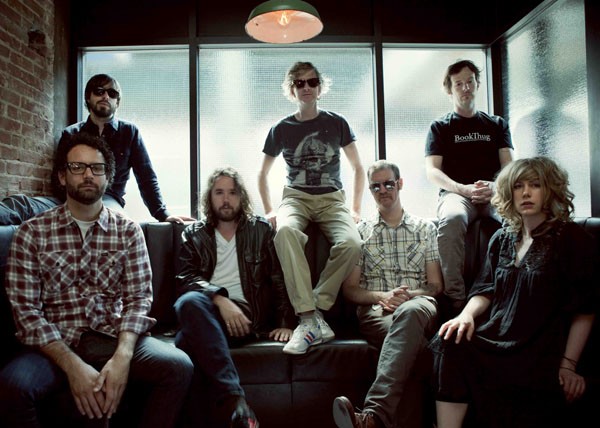 When it comes to teamwork, the most calamitous evil that can invade a group's harmony is internal wreckage - slow, noxious self-destruction. One loses patience, another loses trust and eventually each member struggles to maintain focus on the group's initial reason for existing. Sometimes, all it takes is time apart for a group to regain control of itself.

Not only is this the case for indie-rock collective Broken Social Scene, it's precisely what keeps their machine going. Composed of anywhere between 17 to 31 members at any given time, BSS depends on its ever-revolving nature: Without the constant rotation, the space for destruction widens. When Kevin Drew and Brendan Canning, members of Canadian rock bands KC Accidental and hHead in the '90s, respectively, joined forces in 1999 with the intent of creating a society of musical artists, the odds of success were slim. But as the society grew and its members took on roles that became essential to the band's unique form, their success seemed likely.

Broken Social Scene's debut album, 2001's Feel Good Lost, and its follow-up, You Forgot It In People, sold more than 150,000 copies worldwide. But by 2006, the crew came to a screeching, unpredicted halt. Frontman Drew recalls the group's atrophy with an unusual respect for the role that the roadblock played in the creation of BSS' most recent album, last year's Forgiveness Rock Record.

"We definitely hit a head after '06," Drew says. "We went as far as we could, and a lot of people were frustrated by the end of it. It's a huge group to tour with. It's not something that you can take lightly; it's something that tests your patience every single day.

"So if you get anywhere close to being burnt out or losing your patience or you're not into compromise anymore, then it's not gonna work," he says. This collective frustration led to a hiatus after the tour ended in 2006, one that, for Drew, Canning and Justin Peroff, the band's main drummer, never really happened.

"We're all addicted to making music, so the music was still gonna be made. I wanted to take a little bit of a break, but the realistic thing was that it didn't really happen," Drew says. After he released his debut solo album, 2007's Spirit If, he went on tour with a couple of Social Scene members but struggled to get the time apart he'd originally craved.

"It was basically Justin, Brendan and I in a new band, but we ended up playing a lot of Social Scene songs," he says. "It just started to become a little bit like, ‘Why aren't we just doing this as Social Scene?' And when Andrew Whiteman and Charles Spearin returned in '08, Brendan and I both knew, ‘OK, let's start focusing back on the band together, and we'll build it up again.' And that's how we ended up with a record in 2010."

Social Scene's temporary split in 2006 sent guitarist Andrew Whiteman (Apostle of Hustle) and bassist Charles Spearin (Do Make Say Think) far into their own musical endeavors, but some solo albums produced by the crew during this time, such as Canning's Something For All of Us, included guest appearances by other Social Scene members. Eventually, these projects became less like a breakaway and more like an omen.

It's a process they plan to implement as long as Social Scene exists - a sort of therapy for the crew.

"That's why all these other records always happen, because it's a good place to get your views and your opinions out without having to hear anybody else's. And it gives you the strength to come back in [the band] because you feel satisfied in that area," Drew says. "It's very much the way that Social Scene works. We need to continue to go outside to be fulfilled by one's self."

Empowered by this self-fulfillment, Social Scene convened with producer John McEntire (Tortoise, the Sea and Cake) to produce Forgiveness Rock Record, their most instrumentally detailed album yet, one that drips with riddles and wordplay. Each of the 14 tracks brims with hectic melodies and masterfully placed lyrics, like the synthesized haze of "Sweetest Kill" and the sonorous confessions of "World Sick." ("We got a minefield of crippled affection / All for the borrowed mirror connection / That's why I'm leaving this spoken protection.") Among the voices are BSS breakouts Leslie Feist, Emily Haines (Metric) and Amy Millan (Stars). Their  biggest contribution, the female-dominant "Sentimental X's," swims in an alluring wave of gusty lyrics, transforming the album into more than the sum of its parts. To steal a single voice or harmony from the album would be to leave it treading murky waters.

"One thing I keep in my heart is you don't market your friends to make sure that you don't mislead people, and you don't speak about people. A lot of people are tricky in how they wanna get information about friends of yours that are very much in the limelight," he says. "You have to be aware and responsible, and you have to constantly let people know that you love them and you're not out there to do anything but help them. I'm proud of my friends, I'm proud of the work that they did. They did not get there easily. It wasn't fuckin' simple."

As buoyancy fades and patience dwindles, however, the ticking of that internal time bomb is audible to everyone.

"We [made] an agreement that we would give [it] three years: Getting the band back together in '08, making the record in '09 and touring like mad in 2010," Drew says. "So now, coming into 2011, we're gonna play some more shows, but it's a nice place because that agreement's up and we [can] figure out what we wanna do next.