Hunters bring their noise-rock mischief to the Social

Joking aside, get the actual origin story of Brooklyn’s Hunters 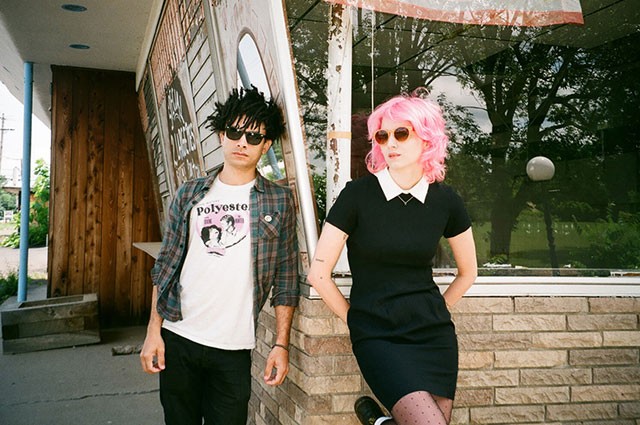 HUNTERS with Hunx and His Punx, Queen Beef, Golden Pelicans

Roam around the Internet’s celestial cobwebs for a few minutes looking for interviews with Hunters, and there’s a solid chance you’ll stumble upon contradictory accounts of the first meeting between Isabel Almeida and Derek Watson, guitarists-vocalists and the foundation of the Brooklyn four-piece.

According to the intro of Hunters’ December 2011 interview with Prefix (prefixmag.com), the duo originally convened at a barbecue. In a January2012 conversation with The Deli (thedelimagazine.com), Watson says, “I was a dishwasher at Renee’s, and Isabel was a waitress there,” possibly referring to a Queens spot called Renee’s Kitchenette & Grill. According to a December 2012 Village Voice cover feature, “The two met in New York City three years ago while working for a Chinatown arcade where they made change and were tasked with shooing away truants during weekdays.”

“The Chinatown arcade is definitely the first one,” says Almeida, a 28-year-old Brazil native. “Well, Renee’s is just a joke thing that we say, and the barbecue is too.” She also brings up that she and Watson worked together at some place that made elevator music, but history shows there’s a good chance that could be BS too.

Fudging your origin story – especially to such docile results – is a weird maneuver, but one that makes some sense when you consider just how seriously Hunters take themselves. On one side, the outfit – whose ranks also include bassist Thomas Martin and drummer Gregg Giuffre – make snarling, often seething music. They mix and match pieces of punk, metal, grunge and even a bit of bubblegum pop to generate unstable-sounding, distortion-glorifying noise rock. But by the same token, they talk about their work and play their shows like this is all a fantasy that just happened to become never-ending. Hunters went from Watson and Almeida bonding over metal, lobbing around ideas and starting the band as “a joke” to becoming a project they now use to write actual songs and tour nationally.

A Hunters show can be quite the harum-scarum affair. During their first set at a house party on New Year’s Eve 2009 following their formation a few months prior, Watson was struck in the face with a bottle of champagne and started bleeding. Almeida started laughing. They kept playing. At a more recent event, Almeida experienced a concussion after banging her head near the floor, thinking that the surface was farther away than it actually was.

“We always end up hurting ourselves,” Almeida says. “Sometimes, me and Derek hit each other by mistake, like his guitar hitting my head.”

Hands on Fire, their debut EP, was released in October 2011, and their self-titled debut full-length is due out Sept. 24. It’s unclear as of yet what to expect from Hunters’ sound for future releases. Almeida hasn’t thought much about that yet, but she wants a process that’s natural anyway.

“We don’t want to write the same songs every time, but we also don’t want to change our sound completely because we like this sound. This is our sound,” she says, before explaining how she mentally likens Hunters’ output to a TV series. “Hands on Fire was the pilot, the record is season one, and I don’t know what’s going to happen in season two.”