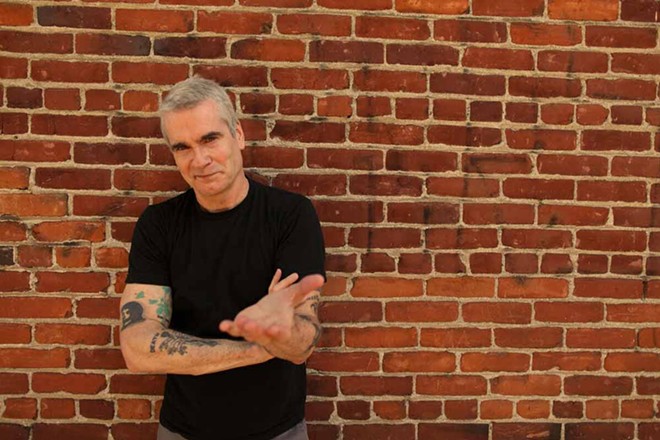 It's said that only two things in life are certain — death and taxes. You can also add "Henry Rollins returns to Florida" to that list, except people actually look forward to that one.

Rollins has been a public figure for over 40 years, but each time we see him, it seems to be in a slightly different version. The man who sourced his performing alias from a certain local private college in Winter Park (an in-joke to make close friend and musical comrade Ian MacKaye chuckle) returns to perform at the Plaza Live on Thursday. It's Rollins' first show in the Sunshine State since the pandemic began.

It's hard to imagine Rollins being affected by anything, but he was, much like most of us. "Travel was out almost immediately," he says via an email exchange with Orlando Weekly. "Touring was over with. Lack of mobility for me was quite a change. I dealt with it but it wasn't easy. I had to figure out how to do things without going places to do them. So, a lot of writing projects, etc."

Rollins, who just turned 61, is probably best-known as the fourth lead singer of Black Flag, America's greatest punk band, a position he held down from 1981 to 1986. Following that, he spent 20 years as leader of the Rollins Band, whose run peaked in the early '90s with MTV staples like "Low Self Opinion" and "Liar." Never one to rest on his laurels, Rollins ended the band in 2007. (He also sang for Wartime and SOA, his original band.)

Rollins expresses no intention of ever playing music again, although the door remains open just far enough to squeeze a single hair through. Instead, the notoriously high-energy Rollins has plied his trade in a diversity of fields, including writing, acting, activism and his spoken-word material.

Indeed, there is a whole generation of fans for whom Rollins' musical career is entirely tangential. The concept of "spoken word" as its own genre largely originates with Rollins' output, which began late in his Black Flag run. Spoken word is distinct from poetry and comedy, although it contains elements of both.

Rollins has no children, but he did inspire the alias of Colby Lopez, aka "Seth Rollins," a four-time WWE champion. He also appears as a playable character in the legendary 2004 video game Def Jam: Fight for NY, which was largely inspired by wrestling, so Rollins is technically WWE canon.

Rollins has written for publications like Details, Vanity Fair, the Huffington Post and LA Weekly, for whom he wrote a column for several years before quitting in solidarity with laid-off staffers. He's authored at least 43 books and chapbooks since 1984, mostly through his own imprint, 2.13.61.

Rollins has also appeared in at least 63 different movies and TV shows, most recently providing the voice of Tri-Clops on the He-Man reboot. (He also starred in He Never Died in 2015, which is a personal favorite of ours.)

We all have regrets, some more than others. But what about Rollins? "Not sure," he says. "I don't do much that would be considered random. I do a lot of planning. There were things I did that I had no idea would fail so completely, like getting an office space in New York City and hiring people to work there. One of them stole a lot of money and wrecked things for a while."

There is one mistake, however, that sticks out: "I had a ticket to see Queen and Thin Lizzy and opted [instead] to get the ton of homework I had to do finished."

We covered a lot of ground in a short interview, but it was the last week of March, and the unwritten rules of journalism required us to ask him about that week's big story, which involved a couple of 50-something actors clout-chasing off each other.