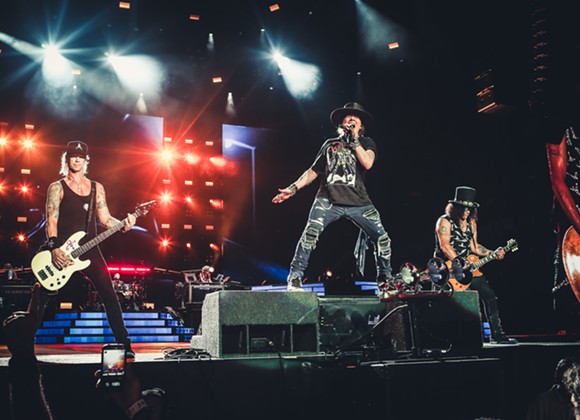 Katarina Benzova
Duff, Axl, and Slash on stage together (!) at Camping World Stadium in Orlando.
"Since I was a child, it's always been my dream to play Camping World Stadium," laughed Ian Astbury. Here he was, the lead singer of the Cult, opening for Guns N' Roses on the latter band's highly anticipated reunion tour, taking a minute out of his band's brisk and powerful set to point out the absurdity of the Citrus Bowl's new corporate branding partner. Of course, his humor was tinged with a touch of bitter irony, because back in '87, the roles were reversed – GNR's first U.S. tour was as openers for the Cult – but time moves on, iconic venues get named after RV dealerships, and rock stars get older.

Which, of course, was the thing on the mind of all of the folks who filled the Citrus Bo... Camping World Stadium last night. After years of acrimony, bickering, and out-and-out weirdness, here was most of the original lineup of Guns N' Roses on stage at the same time playing the songs that – 25 years ago – made them seem like the most exciting and most infamous band on the planet. But hey, that was 25 years ago, so for most folks in the crowd, I'd imagine the expectations for the band to be successful were probably pretty low: Play the hits, light some pyro, don't forget too many words, don't fall over, don't murder each other, and make us remember what it felt like when rock & roll ruled the world.

Simple answer: Guns N' Roses demolished those low expectations and set an example for what larger-than-life rock & roll reunions should look like in this day and age.

More detailed simple answer: Yes, the show started (mostly) on time. No, nobody in GNR will ever be cooler than Duff. Yes, Slash is still one of the best guitarists on Earth. No, nobody fucked up or flamed out in any noticeable way. Yes, Axl looked great, but no, he doesn't look 25 because he's not 25. And yes, Axl sounded great, hitting all the extended yowl-y screams you'd want him to, and often adding a half-measure to their length as if to prove a point.

More complicated answer: I actually can't believe what I just witnessed, because this show was both really great and also really weird. Like, weird in a way that only a GNR stadium rock show can be weird, because only a GNR show will ever have to bend to the will and whims of W. Axl Rose. The entire structure of the set list seemed designed with a pacing in mind that allowed Axl lots and lots of little breaks, during which he'd retreat offstage for a moment or two (probably getting oxygen). And while some of you cynics may want to use that as an opportunity to be snarky about old people getting old, this approach allowed for two things: 1) When he was on stage, oxygenated Axl was all energy, tossing and spinning his mic stand, doing his little shimmy snake dance thing, bounding up and down the catwalk, and delivering those trademark screams with more relish and power than anyone certainly expected, and, 2) When he wasn't on stage, the rest of the band got to get their groove on, with lots of extended solos, jams, and unexpected song selections that added a tremendous amount of musical dynamics – mostly interesting, but occasionally not – to what probably should have been a jukebox revue of the band's biggest hits. (It also meant that "Welcome to the Jungle" was the fourth [!] song played, which is both a ballsy move and one that respects the needs of those folks with babysitters.) In other words: casual fans/haters didn't get to see Axl get winded, while hardcore fans got to hear their favorite band go deep into their catalog.

In other words, it was all you could have asked for while also being what you would never have expected.

Set List:
It's So Easy
Mr. Brownstone
Chinese Democracy
Welcome to the Jungle
Double Talkin' Jive
Estranged
Live and Let Die
Rocket Queen
You Could Be Mine
You Can't Put Your Arms Around A Memory/Attitude
This I Love
Civil War
Coma
Band intros into Slash solo - Speak Softly Love (Love Theme From The Godfather/Andy Williams)
Sweet Child O' Mine
Better
Out Ta Get Me
Jam ("Wish You Were Here/Layla”)
November Rain
Knockin' on Heaven's Door
Nightrain