Gláss gets moody, The Francis Vertigo gets freaky at Spacebar

Jen Cray
Gláss at Spacebar
I recently mentioned how the wider net currently being cast by art-minded Milk District venue Spacebar is a ripe opportunity for bands looking for a stage. To recap, the bar is now opening its calendar on its usually closed Sundays and Mondays for live events. Such upcoming confirmed events include the Slumberjack/Idle Spirit/Sunndiver/Don King show (April 11) and the Gandhi Castle/Yogurt Smoothness/Loft Boys show (April 25).

This past Sunday (April 3) hosted a couple interesting touring bands on Columbia (SC) indie label Post-Echo. Gláss is a trio originating in South Carolina but now based in Athens. Any time an act has a fog machine warm up the stage for them, you know you’re in for some moody business. And they were indeed, haunting the spot with the loom and gloom of early post-punk. More than anything, that dark pulse is their defining lodestar, and they do it well with an overarching pall of angles and shadow. But instead of contentedly threading that narrow needle, the set eventually opened their horizon to include some actual punk and heavier sounds. And, it turns out, these dour boys can rock pretty hard and get unchained when not just painting it black. The combined effect is an intersection of taut dynamics and nice mystique. 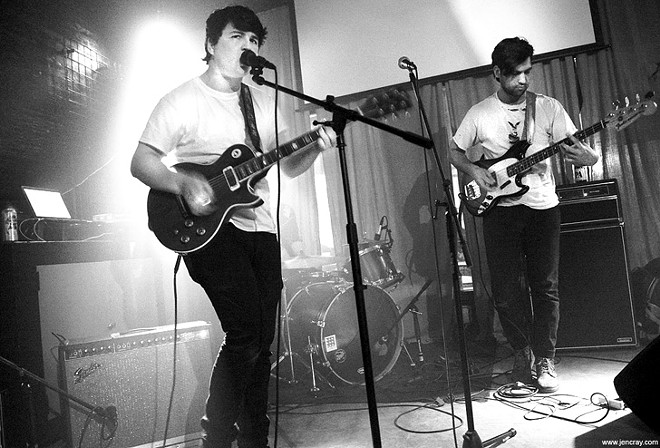 Jen Cray
Gláss at Spacebar
Their mates of both tour and label, the Francis Vertigo, have their own vision of style blending, and it’s much more about miscellany than synthesis. The South Carolina band is some curious mutant of freak rock, spastic math and rock & roll spirit. Even after some considerable reflection, I’m still not sure if their music’s a slow-grower, a no-shower or just too damn odd. What is certain, however, is that they have some lovely, crazy playing and are anything but ordinary.

Jen Cray
The Francis Vertigo at Spacebar
click to enlarge 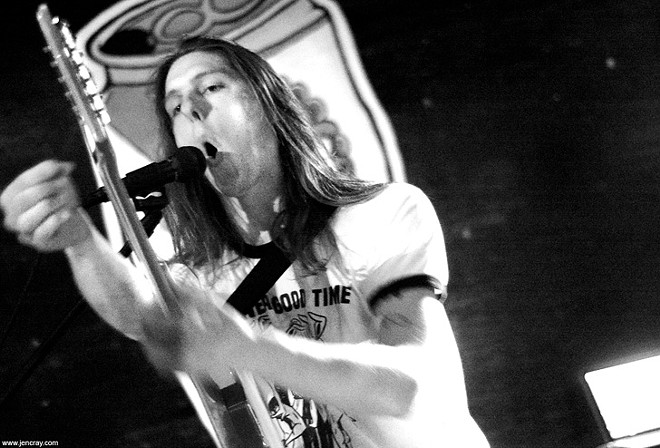 Jen Cray
The Francis Vertigo at Spacebar
click to enlarge