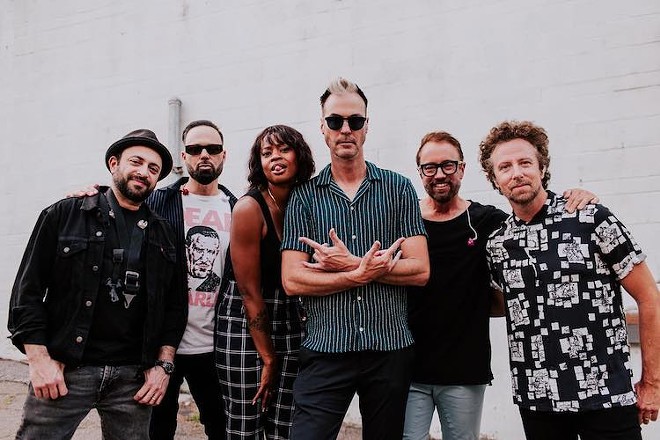 Photo courtesy Fitz and the Tantrums/Facebook

As you might have read elsewhere in this fine magazine, Fitz and the Tantrums are kicking off a co-headlining tour with Andy Grammar right here in Florida.  And the second date of "The Wrong Party" tour is at Orlando's Hard Rock Live on Saturday. So get ready for a night of soulful indie-pop —  the perfect soundtrack for a summer weekend.

Orlando Weekly had the chance to talk to Fitz vocalist and percussionist Noelle Scaggs about the upcoming tour and what life has been like these past couple of years.

A year ago you performed in Orlando at the Frontyard Festival outdoors, how was that experience?
We usually have a really good time in Orlando. We have a pretty strong fanbase there and it's always really fun for me to play there because I have friends that also live in the area. It always feels like a little piece of home when I get to see them and play.

You’re about to start a co-headlining tour with Andy Grammer, how did you all link up?
He's a fan of ours. We're a fan of his and it just really made sense to put us together in a co-headline situation. I think it's just being fans of each other as people and as an artist, and our experience playing with him before was always really great.

What were some of the challenges or obstacles you encountered during your 2021 tour?
It's really more back-end things. So it's all that you don't see. If anybody gets sick on the road, you have to go home and at any moment any one of our band members, any one of our staff members could have gotten ill, we could have had to cancel. We did have some cancellations of shows. It's just really that kind of unknowing and it's not to say that that's not a part of the process right now.

What kind of impact would you like to have on your audience, what do you want people to take away from your show?
Joy, just having a good time and leaving your problems when you come into the venue. Celebrating with other people screaming, dancing, just letting it loose. It's nice to just see people dancing and singing along. So that's what we want from you.

What was an “oh shit I’m famous” moment for you?
I don't think I'm famous. I've never had that moment. As far as just knowing that our music has banded to more than five people, I think it was our first time playing at Lollapalooza and really getting to see our fans from around the world on one stage and on our first tour as well. Going into cities that we've never been in and selling out the venues and seeing the amount of people that knew the songs — that was just for me, knowing that we were growing and then obviously when we had our first number one hit.

Obviously playing in Orlando this time around and really kicking things off on this tour is going to be great for us. And I'm really looking forward to playing in my home. My home city here in Los Angeles. And getting back in front of my friends. The Greek Theatre is one of my favorite venues to play out in the city. I'm really looking forward to that.