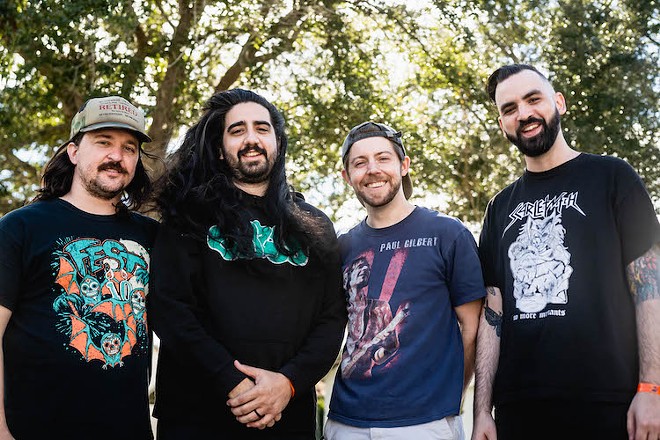 Over 10 years on as a band, with multiple cities, states, partners, kids, animals, day jobs and creative projects between them, Dikembe are still creating, growing and, we are excited to report, touring. Along the way, the've become an institution among Florida's punks.

Emailing us from Michigan, the band’s bassist Randy Reddell gave us the lowdown on the Dikembe dudes whereabouts: “Steven is in Orlando, David in Gainesville, Andy in Melbourne Beach, and I actually moved to Northern Michigan and have a little farm going. We also have added a third guitarist, Scott, who lives in Jacksonville.”

The last time the members of Dikembe shared the same physical space was in December, and they haven’t been on a stage in Orlando since before the pandemic, the longest they’ve gone without playing in the City Beautiful. With Orlando being home to the band’s lead singer Steven Gray, we believe we can officially call this band our own, and on July 17 they are coming home. Reddell confirms, ”Orlando is a hometown show for us, and we're always excited to play Will's Pub for like the 100th time.”

Though Will’s stage has missed the band’s presence since the end of times began, Dikembe hasn’t let the pandemic slow them down. 2020 saw the release of their latest record, Muck. A deeply personal project, Muck pointed the band towards new sonic and songwriting directions. Indeed, Muck evinces some grunge undertones — one of many rewarding results from a truly collaborative writing process the band hadn’t known before.

Fans can look forward to hearing these tracks live for the first time, alongside classic Dikembe favorites. Vaccinations keep people drastically safer, but the band is employing several necessary measures to keep themselves and showgoers safe. They’re stocking up on COVID tests and plan on testing every day.

“Touring 100% is different, in the past we would stay with strangers and sleep on dirty floors, but now we have to be a lot more cautious so that we can keep the tour going. … It also costs so much more because now we are having to stay in more hotels, and gas is insanely expensive.”

Reddell has survived a few COVID scares himself. He was one of the first people to test positive for the virus in Gainesville at the pandemic's onset.

“I got COVID while on tour in March of 2020 and then again when on tour in December 2021, so I really don't wanna get COVID again in 2022," he says. "I plan on staying masked up, trying to limit interactions with strangers, and basically limiting lots of the fun parts of touring different cities.”

We keep us safe, as the old adage goes. Yet despite all the hurdles and existential state of all things, Dikembe is ready for the magic that only the road can bring, “Playing live music is a part of who we are," explains Reddell, "something that moves us and makes us feel good and so we're still gonna keep on trucking.

"I'm always a little nervous before every show and tour, but also incredibly excited to spend time with my friends, traveling, and playing music. Nothing better in the world.”

Speaking of the state of our world, we asked Reddell if we had missed anything in our series of questions, and he offered some wisdom: “Keep protesting injustices, keep fighting for marginalized peoples and donate to your local abortion funds, local bail funds and mutual aid programs. Fuck Ron DeSantis.”

And as for our city, Reddell showed some love to local flavors too: “I'm very excited to eat at Tako Cheena after the show and P is for Pie in the morning before heading out to Atlanta. I can also go to the SmartPunk record shop for the first time, which I've been wanting to do for a while now!” Welcome home, indeed.

Dikembe play Will's Pub with Gillian Carter and Zeta on Sunday, July 17 at 8 p.m. Tickets are still available through Ticketweb.