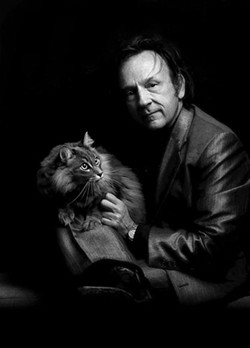 I heard about this Tuesday and shrugged it off as just another April 1 ha-ha: David Yow — frontman of legendarily noisy and aggressive bands Scratch Acid and the Jesus Lizard (which I hold responsible for at least 8% of my cumulative hearing loss) — is writing and illustrating a book about cats.

So, like, the ink-and-paper equivalent of kitteh memes? Caturday, I Can Has Cheezburger, et cetera?

Yes. Not a joke. Akashic Books plans an August release of Copycat: And a Litter of Other Cats, "an irresistible and hilarious book of cat cartoon portraits for all cat lovers, old, young, and in between."

David Yow’s cat portraits, captured here for the first time in book form, are bold, striking, hilarious, and beautiful. Each portrait is based around a pun, but they capture so much more than wordplay. All cat lovers will find something to relish in this gorgeous coffee-table book, which is the perfect gift for cat enthusiasts, animal lovers, and anyone with a playful sense of humor. 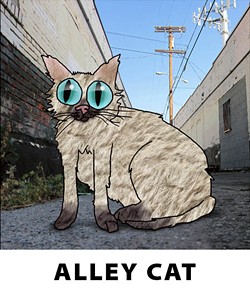 About the book, David Yow says: “I love cats. Always have. The only time I didn’t have a cat was a brief hell in Chicago where I lived in an apartment whose landlord didn’t allow them. At that place, I had a life-sized cardboard cutout of a cat which I named Toody. I also love wordplay. I’m the only adult I hang out with who still gets a kick out of puns. I make up palindromes. I used to write songs and poems (these days, I leave that for the songwriters and poets); in this book of cat-pun drawings, I have made a concerted effort to come up with ideas that range from really funny to really amusing. The entire litter of animals in this book are line drawings that are ‘colored in’ with photographic textures, and each cat is dropped into a photographic setting. Yep, that’s the truth.”

I'm still not 100% convinced this isn't a joke, but as possible proof of sincerity, here's an interview Yow did on pet-fanatic site Catster (!), wherein he reveals that YOU CAN ORDER CUSTOM PORTRAITS OF YOUR CAT THROUGH HIS ETSY STOREFRON

do something. Something not at all related to my cat.

If this is a hoax, it's a pretty thorough one. We'll circle back to this important matter in August.

"Owner's Lament"? Released on the Rabid Cat label? Maybe the clues were there all along