Crowded House: Five Orlando music scenes that know how to pack them in

All photos by Jen Cray

Quit trying to come up with a slogan that explains why Orlando is cool. We don't need a tag to verify our culture. When you tap into something authentic and organic, something self-sustaining through invested interest, something that grows more rapidly than grass in the Florida summer because it's actually a wild thing – that's not an experience that demands a catchy phrase to attract some banal outsider. It's where you take your real friends to escape the tired manufactured bar staples, the false nightlife perks.

We don't have to pretend Orlando is a worthwhile place when it comes to our music scene. It speaks for itself. Whether it's a hundred punks packing into Uncle Lou's or a massive block party bumping out of the Milk District back lot, Orlando thrives by providing unique niche scenes you can embed yourself in for maximum reward or just drop in on to freak up your norm.

Not sure where to turn to tap into one of these scenes? We've got you covered. Track through these interviews with local scenemakers to discover new spots, new artists and for the uninitiated: an entirely new side of our city. There's even more to Orlando's underground than what we've documented here – including steady grooves at Tanqueray's, the tender talent incubator of Red Lion Pub, the brashly out-there knock-outs at warehouse venue the Space Station – which only furthers the point that when your music scene is this rich in substance, it's only natural to find yourself at a loss for words to genuinely capture it.

Jump to the scene you're most interested in:
Colours of the Culture (scroll down)
The Geek Easy
The Milk District
The Civic Minded 5
Uncle Lou's Entertainment Hall

Colours of the Culture

On a late summer night, Bullitt Bar is mobbed with bodies rigidly avoiding contact. The air is heavy. At the end of the bar, a DJ fidgets. Then Niko Is bounds out and throws an arm around a guy who's just joined him onstage. Niko Is lifts his arm and it's like we're all strung to his fingers. We collectively pull toward him. With an easy stage presence and this mad-charming bounce, he opens into his first song while laser lights attempt to compete with his natural electricity. The room responds, dancing freely with fluid gratitude. The rapper jokes and thanks his imaginary band from his new position in the crowd. Everyone laughs with him. It's joyful in that room, pungent with the kind of camaraderie that makes a lonely onlooker press his nose up to the glass. That's how an atmosphere transitions when Niko Is combusts a scene with his pop-up shows. A Niko Is show isn't typically on the books. There are no books – just whatever storyline he wants to feed Orlando on any given night.

"I get autonomy," Niko Is says of performing in offbeat locales like Reilly's Pub and Bullitt Bar. "I get to do whatever the fuck I want. I don't have to answer to nobody. I could throw a show the night before and have a random band, play with people that I've never played with. And I love that. It's real freeing to just do whatever the fuck you want and not have to follow a script. A lot of these other venues, they don't really care about community. I don't blame them! Community doesn't pay the bills. But it does, eventually. You see places that have been about community, like a Will's Pub, maybe even Tanqueray's. They embrace the local artists and they're all about it. It's not just, let's make money." 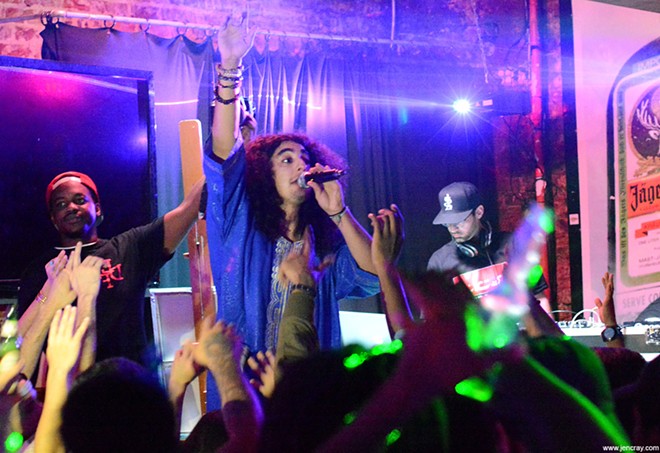 Photo by Jen Cray
Niko Is at Bullitt Bar

Being constricted as an artist is the utmost fear, but Niko Is learned early on that one of the best ways he could liberate his artistry was by seeking a community that would not only stand by it, but elevate it.

"People release one song and blow up, and that's just not the reality of things," Niko Is says. "After the hit fizzles off, where is the support? It's a trend. You're depending on all these people for your videos, for your art and your sound, and then once the label doesn't give you no more money, you have to come up and do it again, start over. That's why people start having this solidarity later in their careers. Because everyone's so selfish and egocentric at first – I was, too. It took me a little while to realize that. But now I'm so happy and blessed that I have the Colours of the Culture. I trust them more than I trust myself."

They say you've only got one shot and if that's true, Niko Is knows full well what his weapon of choice is. It's called Colours of the Culture, and as a single force, it hits like a battering ram of compelling output. At first, it was just phrasing that stuck after notable producer Thanks Joey used it to describe the music they were creating, but recently, the name has come to represent a worldwide collective based on doggedly pure artistry and authentic connection between artists. Colours of the Culture just debuted an album, ROYGBIV: What a Colourful World, and is airing a 10-episode series through Uproxx sharing behind-the-scenes footage (episodes currently online now). Hip-hop icon Talib Kweli, who has joined Colours of the Culture and told Uproxx it changed his life, wrote a heartfelt tribute to the Orlando-sprung collective to continue bringing their craft to worldwide attention.

"It's not coincidental everyone's really ethnic," Niko Is says of Colours of the Culture. "It's like a spice, so we decide: Let's unite. Big Pun said this rhyme once, and it stuck out to me, it's like, 'Let's unite the city and step to the world as a weapon.'"

On his album, Brutus, Niko Is jokes, "I'm in a class of my own, but I never go" ("Vamoose") and it's a pretty apt way to describe how people removed from the local scene can be willfully oblivious. He says he doesn't have fans here, but friends who get what they're about and want to see if other people can see what they see. There's no bigger source of pride as a music fan than discovering something big in your own backyard. 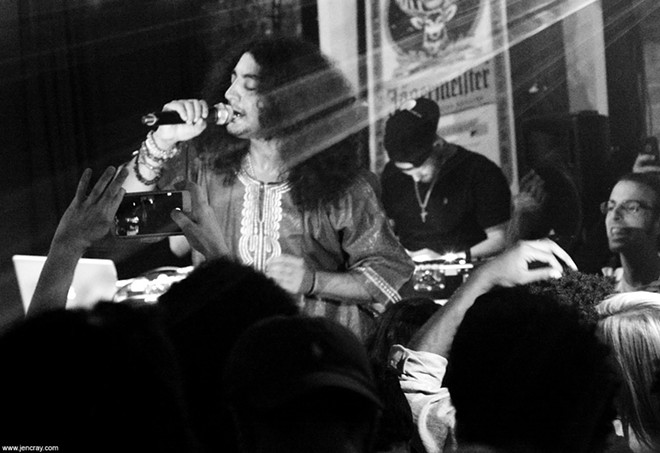 Photo by Jen Cray
Niko Is at Bullitt Bar

"I think people who are in a city like this that never get out complain," Niko Is says. "They're like, 'Ugh, Orlando doesn't care,' 'Orlando doesn't support,' or 'There's the Disney curse.' There's all these excuses that people always create, and I used to say the same thing until I got my hands dirty and I actually did things. Now I'm traveling the world, and I love coming back to Orlando. Because it's always refreshing. It's a different take." – Ashley Belanger

Meet Orlando's Colours of the Culture

Colours of the Culture is much more than just Niko Is' go-to crew of artists and thinkers, but a legitimate movement seeking to express thoughtful, engaged perspectives through different media at the global level. And it's working. They've attracted hip-hop legend Talib Kweli to join their fold (and boost their music through his label Javotti Media and Colours of the Culture features on Uproxx, The Source and Vibe), which accordions out around the world to create what Niko Is refers to as the special spice of the collective's united diversity.

Here in Orlando, though, we get to see a more concentrated and broader spectrum of Colours of the Culture, since the movement began at Dr. Phillips High School with Niko Is and Thanks Joey (plus pals Krikos and YoustheJuice) as young teens squirming to hone their talents. Last year's Brutus LP stands as testament to their continued collaborative force, as Niko Is relies on Thanks Joey to steer his sound as producer for almost all his tracks. Thanks Joey's Brazilian samples pair so well with Niko's respect-commanding flow because these guys go way back, and they look out for each other. (Plus, you know, they're also mad talented.)