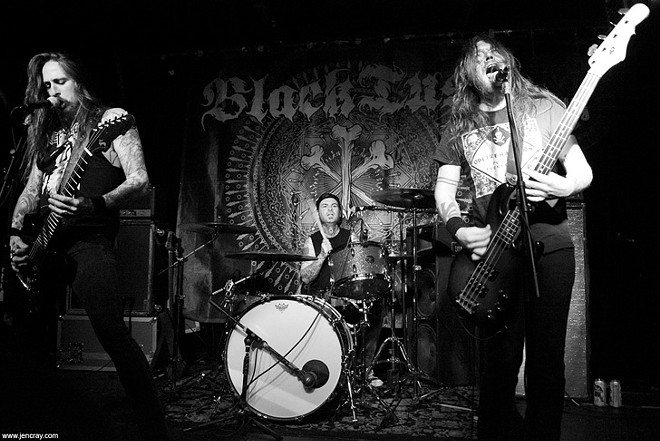 Jen Cray
Black Tusk at Will's Pub
More than just being really good concerts, a couple recent bills – both presented by surging Orlando-based but statewide promoter (and recent Undie award winner for “Best new heavy booking”) Endoxa Booking – underscore how creative and evolutionary of an age it is right now for metal and heavy music. The first was Miami’s Torche (Jan. 22, Will’s Pub) and the latest Savannah’s Black Tusk (Feb. 3, Will’s Pub), two bands that have forged front-line names by opening the horizons of metal with their daring and dynamism.

Jen Cray
Black Tusk at Will's Pub
But beyond even these headlining names, their supporting casts further drive the point by showing bright, unconventional glimpses into the depths with openers that push beyond the metal frontier. With Torche, it was cyber noisemaker Jeff Carey (who will be returning Apr. 1 to Will’s Pub as part of the intriguing extreme Japanese music showcase the MultipleTap Tour). With Black Tusk, it was a lineup that, instead of serving up degrees of the same sound like too many metal shows, delivered diverse excellence. 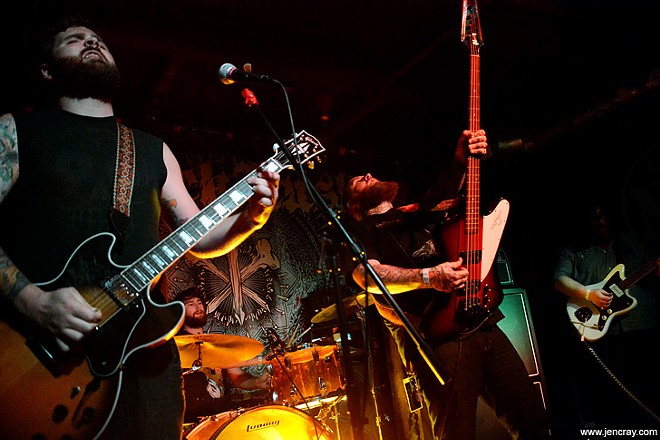 Jen Cray
Bask at Will's Pub
Of the many good openers, North Carolina’s Bask was the most adventurous and interesting. A thoughtful blend of post-metal and abstract Southern rock, their journeying, panoramic music – kin to bands like Across Tundras – is a rich tableau of atmosphere, melody and tonnage. It’s beautifully irreverent of genre bounds and is the kind of thinking that expands the scope and reach of heavy music.

Jen Cray
Royal Thunder at Will's Pub
Atlanta’s Royal Thunder also impressed with a heavy slug of classic doom and dark drama. Live, the brooding Relapse band had much more bite and force than their recordings suggest, and most of that had to do with the major voice and presence of Mlny Parsonz. 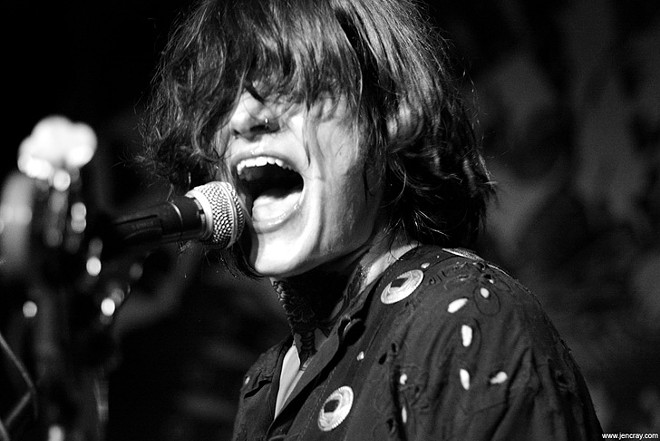 Jen Cray
Royal Thunder at Will's Pub
Though the punk and metal blend of Destructonomicon was probably the most in sonic step with headliner Black Tusk, this Orlando opener had an unusual edge of their own. Although it does exist in both metal and punk, nerdism isn’t necessarily the foremost thing that comes to mind when thinking about those genres – unless we’re talking power metal, which is straight-up dork shit. But these local guys throw it all together with pride like a supercollider. Just look at that name: too many syllables (metal!), “destruct” (metal! punk! probably both!), “destructo” (nerdy twist!), “con” (maximum nerditry!).

Destructonomicon at Will's Pub
Despite all their nerdy references, however, they deliver a not-at-all-goofy punch with their thrashy onslaught. If you hadn’t seen any of their humorous social media and didn’t zone in on some of their lyrics, you probably wouldn’t even know about this streak. And that’s probably the greatest testament to their sonic power.