Bands to see at Tropical Heatwave 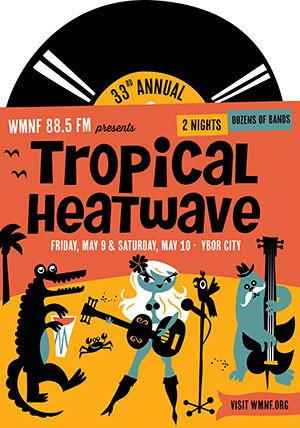 It seems like Tampa's getting all the good festivals lately, what with Gasparilla (March 8-9) and Big Guava (May 2-4) bringing acts like the Flaming Lips, Outkast, Vampire Weekend, Foster the People and Violent Femmes to the Hour-Away Bay. This weekend, venerable Tampa community radio station WMNF is throwing its annual Tropical Heatwave multi-venue festival in Ybor City. While the station has booked a few national touring acts, including Austin party-funkers Bright Light Social Hour and Brooklyn/Minneapolis best-band-in-the-world the Hold Steady, the schedule is heavily weighted toward lesser-known bands from up and down the I-4 corridor. Here are some of our picks for some of the best Florida musical sunshine shining down on Tropical Heatwave.

Orlando's Afeefa and the Boy provide some nice and lovely indie folk, anchored by singer Afeefa Ayube's wonderfully expressive voice. As our own Bao Le-Huu once wrote, "although they nod to traditional folk styles, Ayube injects just enough youthfulness and soul to make their sound less orthodox and a little more colorful."

DieAlps! have quite a buzz going for them over in Tampa, resulting in their debut record soon coming out on New Granada. Maybe this means that labelmates the Pauses will bring them over to Orlando soon? Here's an entire set recorded at Mojo Books and Records just a few weeks ago on Record Store Day (April 19). That girl dancing with her pizza in the background is pretty entertaining.

Tampa twins Brooke and Brittany Graeff create charming, catchy indie pop. Our music columnist likes them so much that he invited them to be featured at the This Little Underground showcase at FMF (April 25). Here's the Holi-inspired video for their lead single, "Hold Me Fast."

Lauris may have left his Central Florida home a little while ago to set up shop in Chattanooga, Tenn., but anyone who caught his residency at Lil Indies last April knows that this guy is Florida through-and-through. Our beloved Ashley Belanger took this video of Lauris performing his original "Walk Alone" during that series of shows, but if you've ever missed him performing his song "Shipbuilding," you've missed out - on having that song stuck in your head for weeks.

Orlando staple Austin Miller has been doing that one-guy-with-a-guitar thing for a while now, but last year's More Than One Way showed a level of lyrical maturity and full-band instrumentation that has been gaining him exposure across the country. For example, here's a clip of him playing "When the Rain Comes" at a radio station in Alaska.

Despite their nearly sacrilegious name (shortened from "The Real Clash of the Titans," which is possibly way worse), Joe Strummer would probably approve of St. Pete's multicultural hip-hop band that uses live instruments and has a drummer that can also beatbox. Especially one that's so down-to-earth that some of their lyrics include "I do not make it rain 'cause my wife would not be happy if I did that / I might need a new place to live at." Watch them perform "What Hip Hop Looks Like" below.

If there anything we haven't said about our recent coverboys Roadkill Ghost Choir? This DeLand band is primed to blow up, recently performing on The Late Show With David Letterman and the even-more-prestigious This Little Underground showcase at FMF. They have a prime spot at Tropical Heatwave, so they should gain a few more converts before the release of their debut full-length, In Tongues.

This NYC band plays in Central Florida fairly regularly. Their new-wavey dance party anthems kind of sound like Adam and the Ants crossed with the Rapture. They haven't really been able to capture the excitement of their live show in the studio yet, so even though the sound is kind of crappy in this video, it's probably the best example of what they're like live. Watch that security guard get really pissed when frontman Ezra Hulleat starts climbing the curtains.

God, if we could get Brooklyn's Moon Hooch to play a show with Orlando's Moon Jelly, our brains would end up, well ... on the moon, we guess. Somehow crafted from one drum set and two saxophones (sometimes with a singer), this is music for those as into Laurent Garnier as they are into Ornette Coleman.  They describe their genre as "cave music," as opposed to "house music," but one thing's for sure: If you miss their set at Tropical Heatwave. you're a dummy.

Tickets for Tropical Heatwave are still available for $40 for both Friday and Saturday.