When I moved down to Florida from a small town outside of Boston, my mom started listening to country music in her car ALL THE TIME. It was a maddening overload of the exact vein of music I proclaimed to despise, but due to repeated exposure, I learned the things I secretly enjoyed about the genre. (If you go back in time and tell any of my friends, I will gut you.) Later I found out that the songs I gravitated toward were a lot of the obvious classics: Johnny Cash, Dolly Parton, George Jones, these guys got a lot of radio play in South Florida in the late '90s. And I'll admit I was warm to '90s stars, too: Garth Brooks, Trisha Yearwood, John Anderson. And I will always enjoy a good song about tequila. But it wasn't until after college that I started really loving the country legends who comprise the bulk of my record collection now: Buck Owens, Lefty Frizzell, Roger Miller, Tammy Wynette. Head and shoulders above anyone is Merle Haggard, though, and this Sunday, thanks to SeaWorld's Bands, Brew & BBQ, I finally got to see the Hag from the front row, and his latest band of Strangers, made up of many of his family members, as well as Wayne Hammond, who has been touring with Haggard since 1967 and performed on the pedal steel guitar. It was an ecstatic hour of mostly his hits, and his set drew an admirable crowd of diehard fans and tourists alike. For what it's worth, I'd say the admission price of SeaWorld was actually not that steep to ask for the show, given that the attractions all had minimal wait times (less than 15 minutes for any ride, and most of them you could just walk right on). I digress, though. We can talk about how terrifyingly delightful the Manta is some other time.
click to enlarge 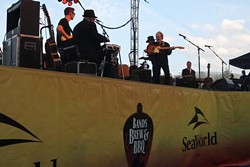 Merle opened with "Ramblin' Fever," and within the next 20 minutes hammered out "Silver Wings," "Mama Tried," "Lonesome Fugitive" and "Working Man Blues," which would've been enough for me to pack up and go home. At 75, Merle's stage presence maybe isn't what it once was, but he more than proved his skill on both guitar and fiddle, and his delivery, which he cribbed somewhat from Wynn Stewart but over time has made distinctly his own, served at the best times to transport you back to his prime in 1970. He covered Johnny Cash and Bob Wills and even quipped during one of his new songs, "Working in Tennessee," that this was real country music. And you couldn't fight him on it (not that I'd want to get on the fightin' side of Merle). It was a sensational treat to see a real country band, with pedal steel, fiddles, mandolin, rhythm guitar, bass - hell, there were two sets of keys on that stage.

Other notable songs from the day include "Kern River," "Big City" and "Rainbow Stew," which irreverently chastises John Lennon's Imagineers. The set closed with "Okie from Muskogee," and if you hung around the park a bit longer, you'd have seen Merle's Strangers wandering SeaWorld, but not the Hag himself. My guess is he hit the swingin' doors back to his bus to wait out the sunset. Wherever he disappeared to, I hope he reappears one last time before he quits touring like his esteemed colleague George Jones, who recently came through town to say goodbye. My advice to anyone reading: catch the legends while you can, because we don't seem to be making them anymore. 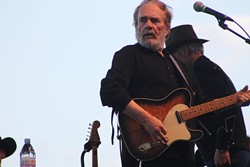