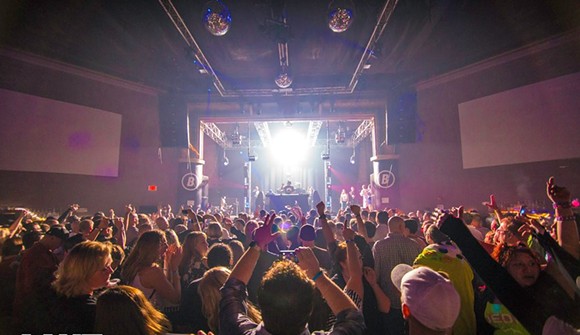 Brian Miller Photo
Our sense of history may be a little blunted here in Central Florida. A common criticism of the area is that we’re all a little too eager to tear down the old to make way for the new. Blame our reliance on tourism, blame a populace whose roots largely only go back a generation or two, blame whatever. But one era of our history that deserves to be acknowledged on a regular basis is that period of time back in the early ’90s when our collective finger was on the pulse of the future of dance music. Predating the current trap and EDM boom by decades, the mix of Miami bass, hip-hop and house that came to be known as “Florida Breaks” was prescient, even if it all eventually imploded once concerned parents and politicians started to take notice. This week’s AAHZ reunion hearkens back to those days with a lineup that looks like it’s straight off of a flyer from 1993: Kimball Collins, DJ Icey, DJ Stylus, Dave Cannalte and Andy Hughes. This edition also brings in Scratch-D of seminal Miami bass group Dynamix II, whose “Just Give the DJ a Break” helped spread the bass gospel to the masses in 1987 when it managed to hit No. 50 on the U.K. Singles chart. The crowd at this show might have a few more gray hairs than most dance nights in town, but you can’t argue with the pedigree of the music.