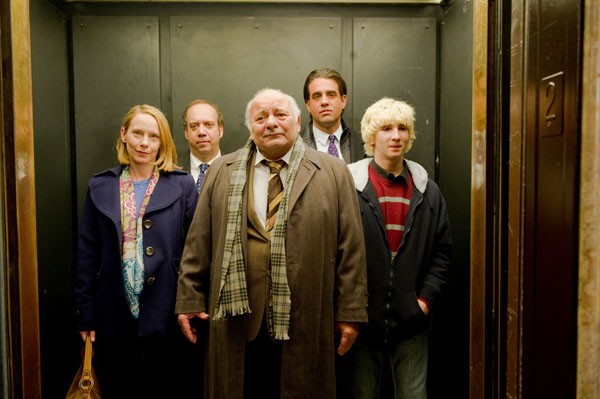 Tom McCarthy's specialty as a director, rather than as an actor, understandably tends toward low-key showcases for his casts. The Station Agent and The Visitor were both dramas about unlikely friendships with a built-in gamut of emotion for his subjects to run, and his new film, Win Win, is no exception. It is, however, his least satisfying film to date - a fairy tale at odds with a morality tale that is nonetheless chock full of warm performances.

It's the type of film that opens with the hardly subtle sight of a fallen stained-glass angel and the on-the-nose mother-daughter exchange of "Where's Daddy?" "He's running." "From what?" Daddy is Mike (Paul Giamatti), a stressed-out New Jersey attorney tempted to take on the guardianship of a senile client (Burt Young) for a much-needed monthly stipend, only to simply shuffle the old man off to a nursing home after the fact instead of caring for him as promised.

However, the moment Mike takes advantage of that situation, said client's grandson, Kyle (Alex Shaffer), shows up at his doorstep, having just hoofed it from Ohio. Mike and his wife Jackie (Amy Ryan) reluctantly take the boy in. As it turns out, Kyle is a wrestling wünderkind, and Mike happens to work on the side as the coach of the local, losing wrestling team. It seems like a win-win indeed, but just when Mike takes advantage of this situation, guess who shows up fresh from rehab? Cindy, the elderly client's daughter and Kyle's mother (Melanie Lynskey, doing her best Winona Ryder).

McCarthy initially adheres to underdog sports conventions, stacking the odds against Mike and then watching as he and his friends and family get what they wish for, all to the sound of Lyle Workman's overly precious score. It's a more nuanced take on The Blind Side's debate of whether helping others to help one's self is an inherently compassionate or selfish action, a clumsy but generally charming coupling of mainstream crowd-pleaser and ready-made festival darling.

Giamatti, Ryan and Jeffrey Tambor and Bobby Cannavale (as Mike's assistant coaches) convey their initial reluctance and eventual excitement to amusing, and yes, winning effect, with each character given his or her own reasons for investing themselves so greatly in such a simple cause. Shaffer, on the other hand, is a great wrestler and adequate actor, speaking mostly in a monotone and so disaffected as to become the equivalent of emotional Teflon when the stakes become personal.

We're spared the big, fat championship match common in this type of film, but only because McCarthy decides to switch gears and adhere to domestic drama conventions instead, once Cindy shows up and the bottom falls out on Mike's noble schemes. Save for Shaffer and Lynskey, the performances remain rich, borne out of a real sense of hope and desperation. These are characters leading lives that seem nowhere near as contrived from their side of the screen. As McCarthy the actor's director wrestles with McCarthy the writer, it's this capable cast that keeps Win Win  worth watching.