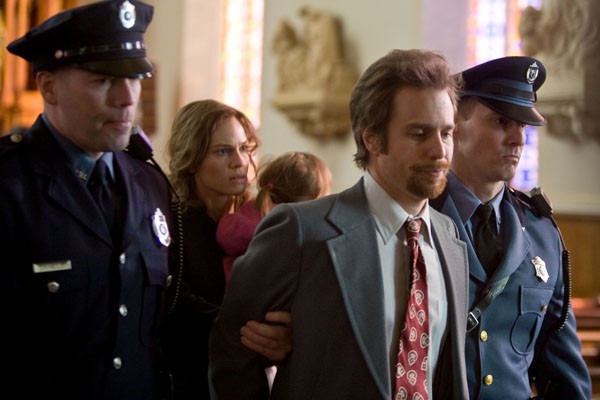 Stop me if you’ve heard this one before: Hilary Swank walks into a bar exam …

This generation’s go-to stand-in for real-life saints is back with Conviction, a slightly less egregious piece of Oscar bait than last year’s Amelia, and a perfectly palatable acting showcase for nearly everyone involved.

Swank plays Betty Anne Waters, a single mother and high school dropout who spent the better part of two decades putting herself through law school in order to exonerate her brother (Sam Rockwell) of a murder conviction. (She’s also showing conviction through her actions! Get it?)

It’s not nearly as maudlin as it sounds. Director Tony Goldwyn (The Last Kiss), himself an actor, seems to leave everyone to their own devices, with Swank doing her doggedly determined routine and Rockwell turning on his temper with convincing ease. Some of the film’s best moments are their prison conversations, as she lays out her grand scheme to serve as his legal representation and he sits there silently, a bit defeated, a bit hopeful and less worried about getting out than letting his sister down.

Rockwell offers the lone note of ambiguity as to his innocence, and as Betty Anne’s best friend and only ally, Minnie Driver even dares to doubt it in the presence of a woman who simply can’t bear the thought. But of course Betty Anne’s right; otherwise, we wouldn’t be watching this gracefully made but ultimately safe movie. It’s like Erin Brockovich without the moxie.

Writer Pamela Gray (Music of the Heart, Goldwyn’s A Walk on the Moon) leaves us little question as to who the antagonists are, with Melissa Leo and Juliette Lewis turning their indignant scowls up to 11.

In Swank’s corner is Driver, a welcome beacon of comic relief and moral support who never resorts to showboating, along with Peter Gallagher (playing the head of the real-life Innocence Project that’s responsible for the critical DNA testing) and Ari Graynor as the daughter who’s grown up without her convict father and wants nothing to do with him. They’re all decent here.

For a movie in which people are arrested in the middle of funerals, where parents forget about fishing trips with the kids and reportedly destroyed boxes of evidence are magically recovered years later, Conviction is not too Lifetime for its own good. Paul Cantelon’s score isn’t that overbearing, and the performances for the most part aren’t that overwrought – though the accents sure are. Most importantly, Goldwyn understands that life-changing rulings often take place in empty courtrooms with a quiet sense of triumph and without a cheering crowd.

I know this is a real shrug of a recommendation – trust me, you’ve seen this one before and you already know all the beats. Therefore, you probably already know whether you would mind sitting through it again. To their credit, Goldwyn and Co. make that easy to do.