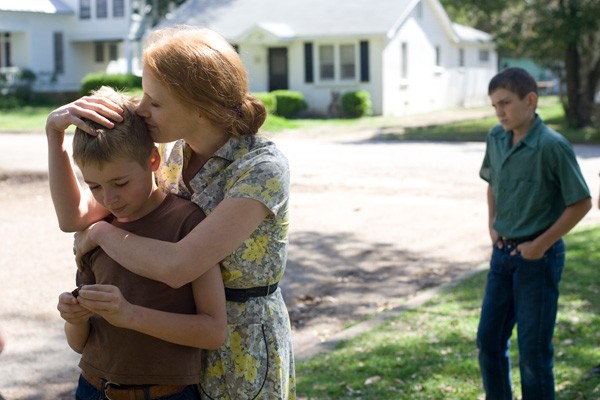 Look, I'm no fan of artsiness for the sake of artsiness; I'm the first to admit that while I enjoy the finer points of the work of many filmmakers, from Ozu to Apatow, others tend to bring out my inner philistine. More often than not, Stanley Kubrick spells naptime for me, and I have no doubt that Jean-Luc Godard's latest cinematic WTF would probably bring on a migraine from the amount of eye-rolling I'd be doing.

So when Terrence Malick, the enigmatic director of exactly five films in the last four decades, begins his latest, Tree of Life, with snapshots of grief and long takes of tree branches swaying in the wind, only to cut to a light in the darkness, a roiling fire and, I don't know, jellyfish or something – all meant to signify the beginning of life in the universe – let's just say that I was all poised and ready to yell "bullshit!"

The pageantry of this very early – pre-Cannes, even – screening nearly broke the gauge on my BS meter: there was airport-style wanding, guards lining the aisles and a thick packet of companion literature about the film handed out afterward labeled "The Beginnings." It contained sentences like, "In the midst of creating the full breadth of Tree of Life, Malick would put on film some of the most primeval, chaotic and seemingly unknowable moments that have ever percolated in the human imagination."

The thing is, even before they told me outright that I'd just seen something "Special," I had already come to that conclusion on my own. Tree of Life is boundlessly poetic, the work of a master who has tapped into the nature of beauty so deeply that I wonder if there's any coming back for him. Where do you go after you've convincingly contrasted your own semi-autobiographical Texas childhood with a glimpse of empathy in a world ruled by dinosaurs or, way before that, the primordial ooze from which life emerged? If not now, when has he told us everything?

What remnants of a traditional film there is stars Brad Pitt as the patriarch of a blue-collar Waco family in the 1950s. His wife, played by the luminous Jessica Chastain, whose work in the too-little-seen Jolene surely prepared her for this challenge, is an ethereal, red-headed earth mother whose nearly Oedipal romps with her three boys are chronicled from their birth to, at least in one case, death. Until a midpoint expansion of the boys' story, anchored by the stunningly natural non-actor Hunter McCracken (his older self is played, briefly, by Sean Penn), during which McCracken's Jack O'Brien visibly roils from the hormone bomb going off inside him, we only catch glimpses of the O'Brien home, usually from a child's point of view. The effect is visceral; it's as if Malick has located our inner emotional keys (be they parental or infantile) and plays them like a requiem.

There were several times in my viewing that I welled up with tears for no discernible reason, a thoroughly surprising reaction that could only be conjured by an expert storytelling wizard. It's not that Tree of Life is depressing – it's that it speaks to a different part of the brain than typical narrative fiction. Malick wants the real you to show up and take in his often torturously slow-moving images, forcing the viewer to take the time to examine themselves in the process.

There is one such sequence that didn't work at all for me, and snapped me right out of my newfound hippiedom, and unfortunately, it comes right at the end as Penn makes his way to a beach filled with lost souls. It's as if Wim Wenders and Clint Eastwood teamed up to punk Malick while they had the chance, and it doesn't belong here. But it's a mark of how absolutely gorgeous the film preceding it is that it didn't leave me sour. Instead, it left me that much more appreciative for the more than two hours before the scene, when Malick made me forget I was watching a movie at all.