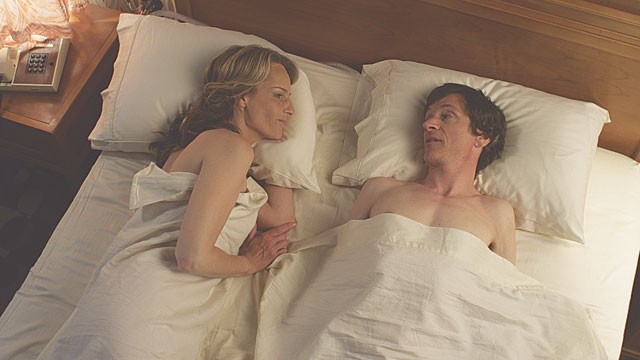 Opens at the Enzian on Nov. 16

There's an apocryphal saying out there that if a caterpillar actually thought for a moment about what all its many legs were doing, it'd fall on its face. Sex is one of those things humans simply can't think about too much, clinically speaking. Oh, sure, we think about sex every second of every day, but not about its mechanics, the act itself or its many considerations. Adults, at least, tend to mentally zoom out, away from the "street view" of sexual intercourse, settling comfortably on the general terrain.

The Sessions, a minor, quite genial look at a severely disabled man who hires a sex surrogate to help him lose his virginity before he dies, forces the audience to think about sex as the caterpillar might think about walking – as Mark O'Brien, a real-life journalist and poet who passed away in 1999, must think about it. Played with abundant zeal by John Hawkes (Martha Marcy May Marlene), O'Brien spends most of his day inside an iron lung, imagining what it must be like to feel a woman's hands touch him with intimacy rather than with mundane purpose. When a therapist recommends a sex surrogate – a trained and licensed person who helps their clients overcome anxiety, mental blocks or physical impediments with the goal of sexual fulfillment – O'Brien, and The Sessions, becomes solely focused on his desire for penetration.

Enter Helen Hunt as Cheryl, a well-adjusted surrogate with an understanding husband and a sullen teen son. Cheryl considers her work sacred, as does her hubby, who calls her a saint. She and O'Brien are allowed six sessions (strictly temporary gigs keep the pesky emotions away) to reach their goal, and with each premature ejaculation or mood-killing squabble, the ticking clock gets louder. Their rendezvous make up the majority of The Sessions; writer-director Ben Lewin, a Polish film/TV veteran but relative newcomer to Hollywood, mostly respects Cheryl's at-home privacy and eschews in-depth glimpses of O'Brien's creative mind in favor of his day-to-day charm and good humor. With one huge exception (for O'Brien) – his confessional relationship with a Catholic priest (William H. Macy), who advises him that God would probably allow a premarital pass considering his situation – the story stays in the bedroom.

Given the film's narrow focus on hetero penetration, things get awkward fast. Hawkes and Hunt, guided by Lewin's big-hearted direction, keep remarkably straight faces, allowing for an often humorous and compassionate profile of a sexual caterpillar. Hunt's tangible
disregard for false modesty does justice to the misunderstood surrogacy profession, while Hawkes' committed yet matter-of-fact portrayal of O'Brien masterfully avoids theatricality or sappy heartstring tugging. The Sessions is the second film in recent months, after the surprisingly sweet Meryl Streep vehicle Hope Springs, to emphasize the biological and romantic necessity for sex, no matter the age or physical ability. In a bafflingly prudish political season, these films matter that much more.