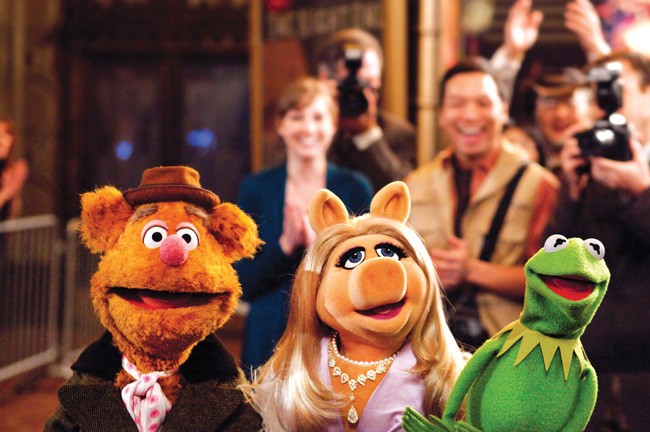 Never question Miss Piggy – or at least the guy who first gave her voice. A generation of TV kids was left crestfallen recently when Frank Oz, the man behind the pig (and Yoda and Cookie Monster) cast doubt upon The Muppets, Disney’s big-screen relaunch of Jim Henson’s treasured creation. Oz said in an interview that he turned down the movie because the new script, by executive producer and star Jason Segel and executive producer Nicholas Stoller, didn’t “respect the characters.” It was assumed by many, including myself, to be a case of sour grapes, especially considering Oz had wanted Segel’s gig to begin with.

Having now seen the movie in question, I disagree with Oz on the issue of respect – The Muppets is nothing if not slavishly devoted to the old guard’s property and reputation – but I can certainly understand the grumblings. The Muppets is enormously ambitious; Segel and Stoller’s script hopes to bring their rapturously joyful enthusiasm for the felt creatures to life via bouncy, catchy musical numbers, big colorful costumes and a swirling miasma of pop-culture references and Hollywood cameos – just like old times.

Under James Bobin’s direction, however, the outing feels cheap and strangely small-screen. That may have something to do with Bobin’s television-heavy C.V. (this is his first feature film), but it’s a sense that permeates everything from the mediocre celebrity appearances – Jack Black and Zach Galifianakis are the only legitimate “movie stars” of the handful – to the painfully dorky song-and-dance routines. When Segel, Adams and a host of smiling townspeople skip along to “Life’s a Happy Song,” one of many excellent original numbers written by Flight of the Conchords’ Brett McKenzie, Bobin’s camera can’t ever seem to find its proper place. Worse, we can hear their shuffling footsteps and heavy breathing over the cue. The effect is that the audience can see the seams – a cardinal sin made worse when surrounded by made-of-felt characters bearing the famously near-invisible “Henson stitch.”

The plot involves human Gary (Segel) and his “brother” Walter, a puppet, both of whom grew up obsessed with The Muppet Show. When Gary takes his girlfriend, Mary (Amy Adams), to Los Angeles for an anniversary vacation, he insists on bringing along Walter so they can visit the Muppet Studios. What they find is a relic in ruins. To top things off, a Texas oil baron (Chris Cooper) believes there’s oil underneath the studios and plans to tear it down and drill.

Contractually, the Muppets can save their studio for $10 million. So the trio hunts down Kermit the Frog at his lonely, Piggy-less mansion in Bel-Air and convinces him to reconvene the gang in order to put on a telethon. Miss Piggy, now a fashion tastemaker in Paris, refuses to take part – though she may come around – but the others are game, including (in the movie’s best bit) a frightened, bottomed-out Fozzie Bear currently performing in a Muppets tribute band in Reno, Nev., called “The Moopets” populated by street-tough impersonators. (Look closely at the human drummer backing them.)

While the film’s first half is almost hallucinogenically clunky, once the telethon gets going, a bit of the old magic comes roaring back. The Muppets were made (well, stitched) to put on a show, and Segel and Stoller, who brilliantly employed their own puppets (with the help of Jim Henson’s Creature Shop) in Forgetting Sarah Marshall, were born to help them do so. At one point, Segel sings, “Am I a man or a Muppet?” This second half proves that he’s a little of both.

Still, it’s too little too late thanks to the too-clever-by-half lead-up and Segel/Stoller’s meta-silliness which plays like a comedic bailout. The true villain here, however, isn’t Cooper’s rapping (yes, rapping) capitalist; it’s the guy sitting in Frank Oz’s director’s chair.