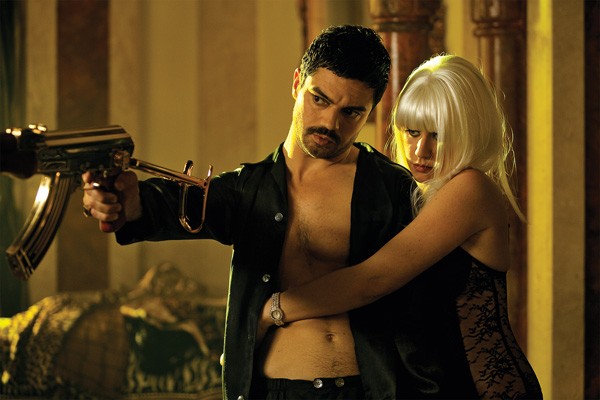 Watch the trailer for this movie below.

From its double-barreled, gold-plated, boner-boasting movie poster to its coke-snorting, trigger-happy, schoolgirl-stalking antagonist, The Devil’s Double is a De Palma-style plunge into the excesses, crimes and vainglorious, pseudo-rock-star life of Uday Saddam Hussein, the hard-partying son of the late Iraqi dictator, as seen through the eyes of his “double,” a look-alike employed for the purpose of dispersing Uday Hussein’s influence and his odds of being assassinated. Stalin had a double, Hussein assures his poor former schoolmate, who is offered the “choice” to live like Uday or to die horribly along with his entire family.

So begins the high-speed, high-stakes tale of Latif Yahia (Dominic Cooper, whose performance as both the fake Uday and the real Uday is a marvel of schizophrenic acting), whose book is the basis for this slick, often funny piece of modern mythmaking from director Lee Tamahori (Die Another Day, Along Came a Spider) and screenwriter Michael Thomas of Ladyhawke fame. As its helmer’s credits suggest, The Devil’s Double isn’t exactly Syriana, but it is relentlessly entertaining.

The film’s classic structure thrusts the audience into the mix, giving us a crash course right along with Latif on Uday’s specific brand of entitlement and monumentally empowered narcissism. He’s the (would-be) king of his world, and he likes it. That contrasts nicely, if expectedly, with Latif’s reluctance and solid ethical backbone. Uday treats women like possessions; Latif feels their pain. That’s especially true in the case of Sarrab (Ludivine Sagnier), an on-call companion of Uday’s who also has no choice in the matter. As Latif settles into his role, speaking out against Arab sheiks to a crowd of Hussein’s paramilitary and dodging bullets, he grows more indignant about Uday’s dangerous behavior.

Naturally, he begins planning his escape, and he hopes, the rescue of Sarrab. Uday, meanwhile, proves a worthy opponent; his guards are seemingly everywhere, he has eyes on the entire country and bottomless reserves of money. Going into the climax, however, it becomes clear that Thomas and Tamahori have written themselves into a corner with no clear escape. We know from the mere existence of Latif’s book that he makes it out – damaged, perhaps, but out. The problem is the means of his breakout, which is methodical, carefully considered and, despite occasional gunfire, almost boring. What results is an anticlimactic petering-out rather than the guns-blazing showdown that the rest of the movie promises.

Still, as a look at the rock & roll, roaring-’90s lifestyle of the deceased Hussein clan, most of The Devil’s Double works like gangbusters. It smartly casts George Bush as a distant killjoy and Papa Saddam as a disapproving figurehead. The real war is at home, even if that home is an opulent den of iniquity, torture and temptation.