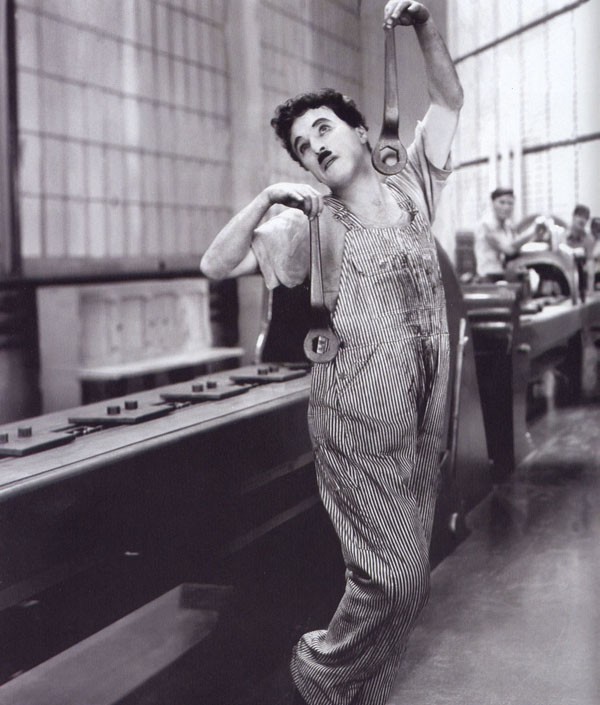 Who was the greatest silent comedian of all time?

As a boxing match, Keaton's The General would convincingly beat Chaplin's Modern Times on points. The General is Keaton's most spectacular, ambitious film and is hilarious as hell, as all of Keaton's best movies are. The highly enjoyable Modern Times (Chaplin's best overall are City Lights and The Kid, with The Circus arguably being the funniest) is actually two movies: The first part is a funny but lethal left-wing critique of the dehumanizing effects of the industrial age, including several classic scenes (Chaplin on cocaine, the automatic eating-machine, the protest leader); the second part involves a string of brilliant gags featuring Chaplin's Tramp character and co-star (and then-wife) Paulette Goddard. Keaton's The General, however, is a perfectly constructed film from beginning to end.

But the matchup is good enough that it's possible to appreciate the best qualities of both comedians. Even though in The General Keaton is not in his usual porkpie-hat character, his legendary stone-faced demeanor (in contrast to Chaplin's all-out, first-class pantomime, which detractors call overacting) is an amazing example of how, with minimalist perfection, he was able to communicate all sorts of emotions. Why anyone wouldn't automatically fall in love with both characters has always been a mystery to me. But I've come to realize that it's not Chaplin the comedian some people don't like, it's Chaplin the man.

While Keaton was a humble, baseball-loving All-American boy with no formal education who lost his first marriage and his own studio to booze, Chaplin was a rich, cocky, left-leaning, womanizing, sophisticated Brit. "Charlie's tramp was a bum with a bum's philosophy," Keaton once said. "Lovable as he was, he would steal if he got the chance. My little fellow was a working man and honest."

Chaplin would wipe his face with someone's beard, kick a policeman in the ass, make playful faces to a baby and then steal his food, and even knock someone unconscious, tuck him into bed and then kiss him on the forehead.

Don't get me wrong: All the accolades Keaton has received (especially after his death in 1966) are more than well deserved. Comparing the two, Michael Phillips of the Chicago Tribune wrote, "Maybe it's just a matter of temperament: The surreal, Zen-like calm Keaton's protagonists display under the most outlandish circumstances appeal to the stoic in us all." But Chaplin's detractors are making a big mistake by saying that Keaton was a better director. He was more subtle and technically innovative, sure, but Chaplin's directorial skills are generally underrated. No one could make the last scene in Chaplin's City Lights (one of the greatest endings in all of cinema) without knowing exactly where to place the camera and when to use a close up.

Keaton dutifully referred to Chaplin as "the Master." But some think it was only a facade. "In public, Keaton was careful to genuflect before Chaplin as the greatest comedian who ever lived," wrote Marion Meade in Buster Keaton: Cut to the Chase. "Not only did he dislike Chaplin personally, but he also despised his Communist politics. His antipathy for Chaplin was rooted in something a great deal more personal: Chaplin's intellectual pretensions inflamed Keaton's old insecurities stemming from his lack of formal education."

Chaplin was no Communist. A socialist, maybe - he cared about human rights, and thus opposed Hitler before it was fashionable to do so. And he made lots of money for the U.S. government selling war bonds during WWI. But his arrogance also got the best of him - in his otherwise brilliant autobiography, Chaplin spends pages describing early obscure romances, but he doesn't once mention Keaton, his only true competitor.

In the documentary Charlie: The Life and Art of Charles Chaplin, daughter Geraldine remembers how she once took a boyfriend to have dinner with her and her dad, who was already living his later years in Switzerland. The boyfriend happened to be a Keaton fan, which was "not the thing to do," recalled Geraldine. The boyfriend started talking about Keaton, "and my father started getting smaller and smaller, and he shrunk, and he was so hurt, as if someone had stabbed him." Chaplin became very quiet, didn't speak for the rest of the dinner, and sat quietly in front of the fireplace. "Then, suddenly," she says, "he looked at my boyfriend in the eyes and said, ‘But I was an artist. I gave [Keaton] work.'" He was referring to a memorable scene in Chaplin's Limelight (1952), the only time the two geniuses shared the screen.

Yes, Chaplin was an artist. But so was Keaton. And the best way to enjoy and honor both is by receiving their art without any preconceived notions or denying either half of the story. While your personal tastes may lead you to decide for yourself who is the "best," I recommend you embrace both.

Me? I'm a Chaplin man. But I couldn't live without Keaton.