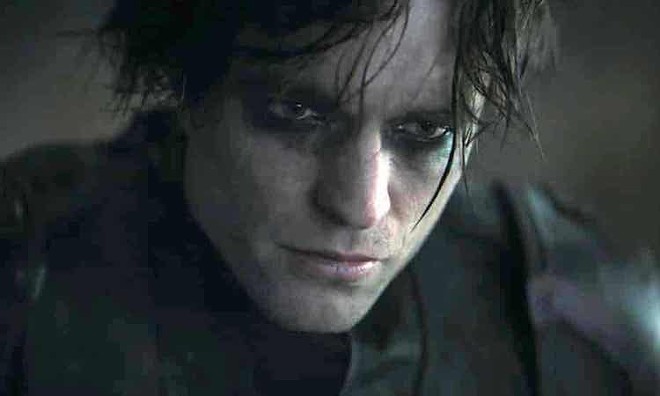 It should come as little surprise that a film directed by Matt Reeves (Dawn of the Planet of the Apes, War for the Planet of the Apes), is extremely cool. And yet, the marketing for The Batman left me uncertain. More than uncertain, actually. Highly skeptical! The casting, the color palette, the odd contouring of the Batman costume itself, the burly runtime, the cautionary commentary from Robert Pattinson — it all foretold a long and somber epic, a dollar-store Dark Knight if ever there was one.

But The Batman is a superhero film all its own, a hard-boiled serial killer detective story that feels much more akin to a David Fincher thriller than an Avengers or Justice League installment. And while it's far too long, The Batman distinguishes itself from its caped-crusader forebears while honoring Gotham City's dark roots and exploring an enormous range of crime, corruption and turpitude. It opens in wide release this week.

Robert Pattinson is Bruce Wayne, playing the billionaire scion in a familiar style: the rich kid with fancy toys fighting crime to carry on his family's philanthropic legacy. In the early scenes, his vigilantism is of a piece with your friendly neighborhood Spider-Man, though the perpetual rain and shadows communicate that Gotham is far more afflicted by the criminal element than Peter Parker's Queens.

(Exteriors were clearly shot in both New York City and Chicago, by the way. Reeves evidently wanted both the peninsular setting and bustling midtown of Manhattan for narrative purposes, but couldn't resist the Dark Knight visuals of the elevated train, the industrial warehouse district and the river bridges of downtown Chicago.)

When the Gotham mayor is murdered, setting off a string of heinous crimes by a puzzle-loving psychopath known as the Riddler (Paul Dano), Detective James Gordon (Jeffrey Wright) enlists Batman to help him solve the case. For the first two hours of the film, they might as well be Morgan Freeman and Brad Pitt in Se7en.

Dano's Riddler feels equally indebted to the Zodiac Killer, Kevin Spacey's John Doe and Jigsaw, the sadistic villain of the Saw franchise. The opening murder is actually very scary and unsettling, and communicates right away that the ensuing film will be dark indeed! The villain is a not some alien or mutant hellbent on global conquest. He's a deranged everyman who kills with home and garden tools.

The Riddler's violence is motivated by a desire to expose a criminal conspiracy involving the city's most powerful leaders. Untangling Gotham's web of corruption is the biggest puzzle of all for Batman, and the high-stakes procedural often makes for edge-of-your-seat viewing.

With compelling storylines for supporting characters — Zoe Kravitz' Catwoman is a 3D character! — an utterly transformed Colin Farrell as the Penguin, two marquee action set pieces and meticulously constructed interiors, the film succeeds as both a narrative and visual product. A sequel is undoubtedly in the offing and looks like it could give The Dark Knight a run for its money.