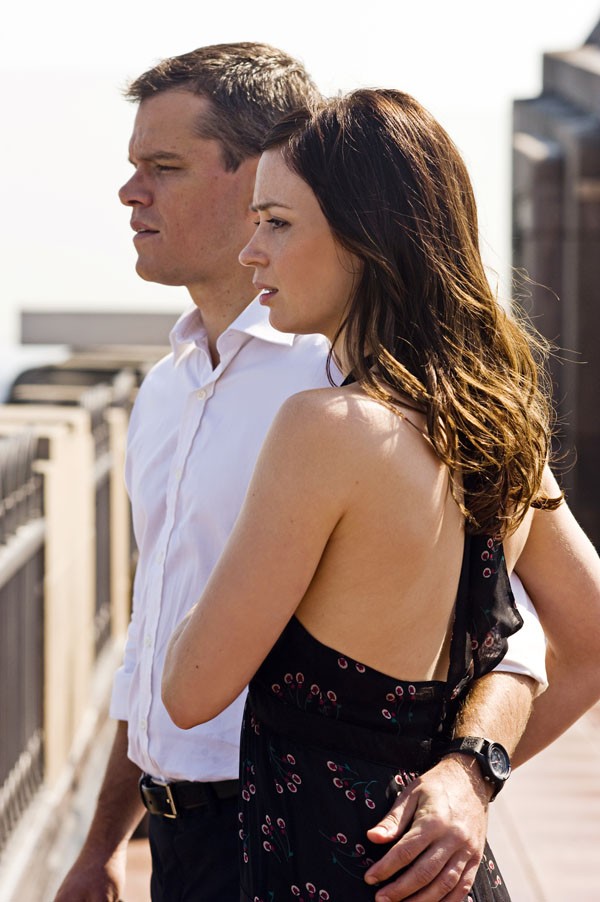 It looks like someone finally went and put Brief Encounter, Dark City and whatever Richard Kelly's been smoking into a blender, and that someone is George Nolfi. For his directorial debut, the screenwriter behind the second Ocean's film and the third Bourne outing has teamed up with the star of those films, Matt Damon, and the result is a refreshing, romantic sci-fi adventure whatsit the likes of which Hollywood rarely  gambles on.

Damon plays David Norris, an exceedingly charismatic and ambitious politician with his sights on a Senate seat - that is, until a chance run-in with free-spirited ballerina Elise (Emily Blunt) causes him to doubt his current career path. This doesn't please some serious men in sharp suits, mysterious agents led by Richardson (John Slattery, Mad Men) who go about discreetly correcting the course of David's life, only to find that fate has a funny habit of throwing these two strangers back together again.

From there on out, Nolfi treats Manhattan as his playground, as the ever-present fedora patrol tries to keep up with a man haunted by his past, seemingly trapped by his future and suddenly determined to seize his true love before she slips away. Damon fully sells David's charms, regrets, skepticism and tenacity in the face of some extraordinary circumstances, and his effortless chemistry with Blunt - an actress who salvages her own role from its evident Manic Pixie Dream Girl mold - helps to ground their against-all-odds romance, not to mention a climactic chase that ventures into borderline goofy territory.

While the marketing would have you believe that this is some sinister thriller, the tone is a bit more lighthearted and wistful than advertised. Slattery's lead agent isn't some ominous mastermind (that would be Terence Stamp); he's simply a career man who has grown weary of love and other weaknesses (such as the compassion shown to Damon's character by fellow agent Anthony Mackie) mucking up an otherwise well-oiled, entirely invisible machine. Similarly, John Toll's camerawork hangs close to the lovers on the run without growing claustrophobic, while Thomas Newman's score fluidly shifts between notes of whimsy, excitement and melancholy.

As for Nolfi's screenplay, which is loosely adapted from Philip K. Dick's short story, the groan-worthy contrivance inherent to most modern romances now finds itself justified/excused/mocked as a matter of blatant external manipulation. It shouldn't work nearly as well as it does, and for some, it simply won't; the proceedings grow quite chatty in the second act, and explicitly monotheistic in the third.

But considering The Adjustment Bureau is juggling big ideas, small moments, old dreams and new obstacles, it's a fairly sprightly take on the battle between designs of fate and leaps of faith, with a little true love thrown in for good measure. When's the last time you could say that about a studio film?