Plus more streaming premieres you won't want to miss 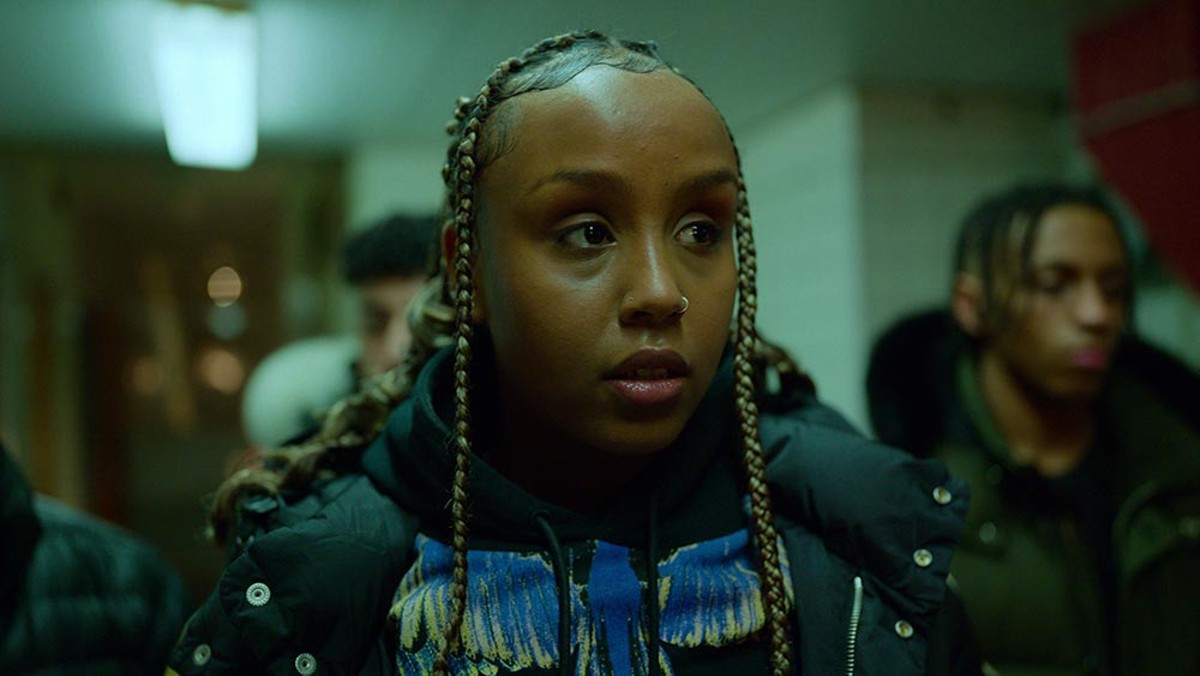 Everything new on Netflix, Peacock, Disney+, Hulu and Shudder this week.

Fortune Seller: A TV Scam — This riches-to-prison doc profiles Italy's Wanna Marchi and her daughter, Stafania Noble, who took to the tube to hawk personal totems they said would bring the buyer good fortune, but which were actually worthless. And thus was the groundwork laid for Peloton. (Netflix)

Meet Cute — Kaley Cuoco plays a woman who uses a time machine to keep tinkering with a date she went on, until she's built the foundation for the perfect relationship. Given that the date was with Pete Davidson, her neighbors had better expect some rolling brownouts. (Peacock)

Monster: The Jeffrey Dahmer Story — Ryan Murphy once again teams with his muse, Evan Peters, this time to tell the story of the notorious cannibal killer from the perspective of his victims. Give it three weeks until HBO Max follows suit with a themed cooking competition. (Netflix)

Only for Love — A series' worth of joy and heartbreak ensues when a bunch of Brazilian musicians try to interweave romance with their working relationships. Gosh, and it always looked so easy for their heroes, El Mac de Fleetwood. (Netflix)

The Perfumier — Talk about multitasking: A cop strikes up an alliance with a crooked perfume maker to win the heart of the guy she likes and regain her vanished sense of smell. If I were her, I'd be worried less about the Love Potion No. 9 and more about the Omicron BA.5. (Netflix)

The Real Bling Ring: Hollywood Heist — They've had their story told by the Lifetime network and Sofia Coppola, and now the young thieves who stole from some of L.A.'s richest and dumbest stars get to speak for themselves in a three-part docuseries. Hey, remember when Paddy Chayefsky showed a crime ring getting rewarded with its own TV show and we all thought that was the height of freewheeling absurdity? Good times. (Netflix)

Shadowland — An Atlantic story about QAnon becomes a docuseries that examines the beliefs of that loony bunch, plus the tenets of the anti-vaccine crusade and some other conspiracy theories that are finding particular traction among women. Right, because the easiest way to win over a woman is by reassuring her that her concerns are all in her head. (Peacock)

Star Wars: Andor — Diego Luna returns to the role of Cassian Andor in a series that shows what the Rebel leader was doing in the years before Rogue One. A prequel to a spinoff? This is how we live now, nerds. (Disney+)

Super/Natural — Executive producer James Cameron and narrator Benedict Cumberbatch reveal the "super powers" possessed by some of the planet Earth's most extraordinary animals. Hang around after the credits to see the She-Hulk twerk with a hippo. (Disney+)

The Dreamlife of Georgie Stone — Nineteen years in the life of the Australian transgender activist are consolidated into an illuminating 29 minutes. That's a nice change of pace from the Peter Jackson approach of making 29 minutes feel like 19 years. (Netflix)

The Kardashians — "I'm the Marilyn and the Jackie" says Kim K. in the trailer for Season 2, as she prepares to infamously defile Monroe's dress at the Met Gala. But wait — if she's also the Jackie, does that mean we'll get to see Pete Davidson's brains blown out all over her law books? Dare to dream! (Hulu)

Raven's Hollow — What if while Edgar Allan Poe was still a West Point cadet, he had stumbled across a murder that seemed to involve an entire mysterious town? Well, we'd probably have heard about it by now, I'd wager. But one of my favorite movies has H.G. Wells chasing Jack the Ripper in a time machine, so I'm hardly in a position to criticize. (Shudder)

Snabba Cash — Jens Lapidus' Stockholm Noir books keep yielding hit Swedish streaming series. This latest concerns a wannabe tech magnate who makes the mistake of turning to the Mob for funding. On the bright side, I bet they can actually do something about her student loan. (Netflix)

Thai Cave Rescue — Mere weeks after Ron Howard's Thirteen Lives raised awareness of the Wild Boars' ordeal in the Tham Luang Nang Non cave, here comes a genuine Thai-made version that relied on the kids themselves as creative consultants. Oh, really? And what makes those arrogant little shits think they can tell their story better than Hollywood? (Netflix) 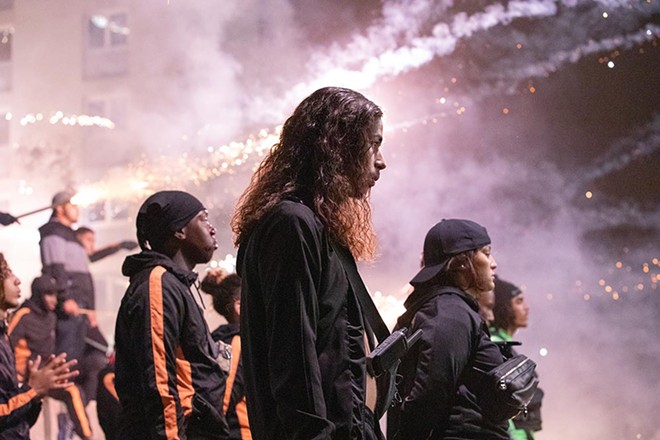 Athena — In the third feature by filmmaker Romain Gavras, the killing of a 13-year-old boy by the local police turns a French housing project into a war zone. Watch carefully for some of the footage to turn up in a Brian Kilmeade exposé called Portland Under Siege. (Netflix)

The Girls at the Back — When one of them is stricken by cancer, a bunch of BFFs decide to spend their group vacation living out their most fervent desires. I sure hope this isn't one of those "It was just something that happened at camp"-type scenarios. Because if so, the cancer part would be kind of a downer. (Netflix)

A Jazzman's Blues — Writer-director Tyler Perry's story of racial identity and illicit love is based on the first script he ever wrote, a full 27 years ago. So why is he saying now is the perfect time to finally be putting it in front of audiences? Maybe he just couldn't think of a way to get Madea on the Artemis. (Netflix)

Lou — A reclusive Allison Janney has to sacrifice her privacy in order to help a neighbor (Jurnee Smollett) rescue her daughter from kidnappers. Good for her: It's so much easier to just give them your Wi-Fi password and tell them to knock themselves out. (Netflix)

Who's Talking to Chris Wallace? — The collapse of CNN+ has sent Wallace up to the big leagues at HBO Max. (At least it's the big leagues for now, until Warner Bros. Discovery turns the place into a 24/7 vending platform for Dyson vacuums.) Wallace's guests this go-'round include James Patterson, Alex Rodriguez, Shania Twain ... and Tyler Perry, who will tie this entire week together by revealing once and for all what Madea was doing during the Portland riots.

11 Minutes — It's the fifth anniversary of the Las Vegas shooting that claimed the lives of 58 attendees of the Route 91 Harvest Music Festival, so here comes a docuseries retrospective to fully explore that tragic incident of "lone-wolf violence." They were going to call it "the unavoidable outcome of a widespread culture of gun fetishization and toxic masculinity," but they only had four episodes. (Paramount+)

A Trip to Infinity — Scientists from various disciplines share their theories of what "infinity" is and how it can be measured. Your job is deciding whether they sound more like Spinal Tap confronting the end of their career or a kid trying to win an argument. (Netflix)

The Munsters — Look, a project like this is bound to be divisive. Some of us look at the advance clips and are beguiled by the supersaturated vaudeville of it all. Others think that when a Grandpa with a mustache is the most promising thing about a Munsters reboot, it's time to apologize to John Schuck. But there's one thing I think we can all agree on: That Rob Zombie is a lucky guy indeed to have married into such an endless wellspring of talent. (Netflix)

Reasonable Doubt — Kerry Washington is in the executive producer's chair of a new series about an L.A. defense attorney (Emayatzy Corinealdi) who plays fast and loose with the law and the customs of her profession — when she isn't cheating on her husband. Throw in a few DUIs, and she just might be able to pass the bar in Florida. (Hulu)