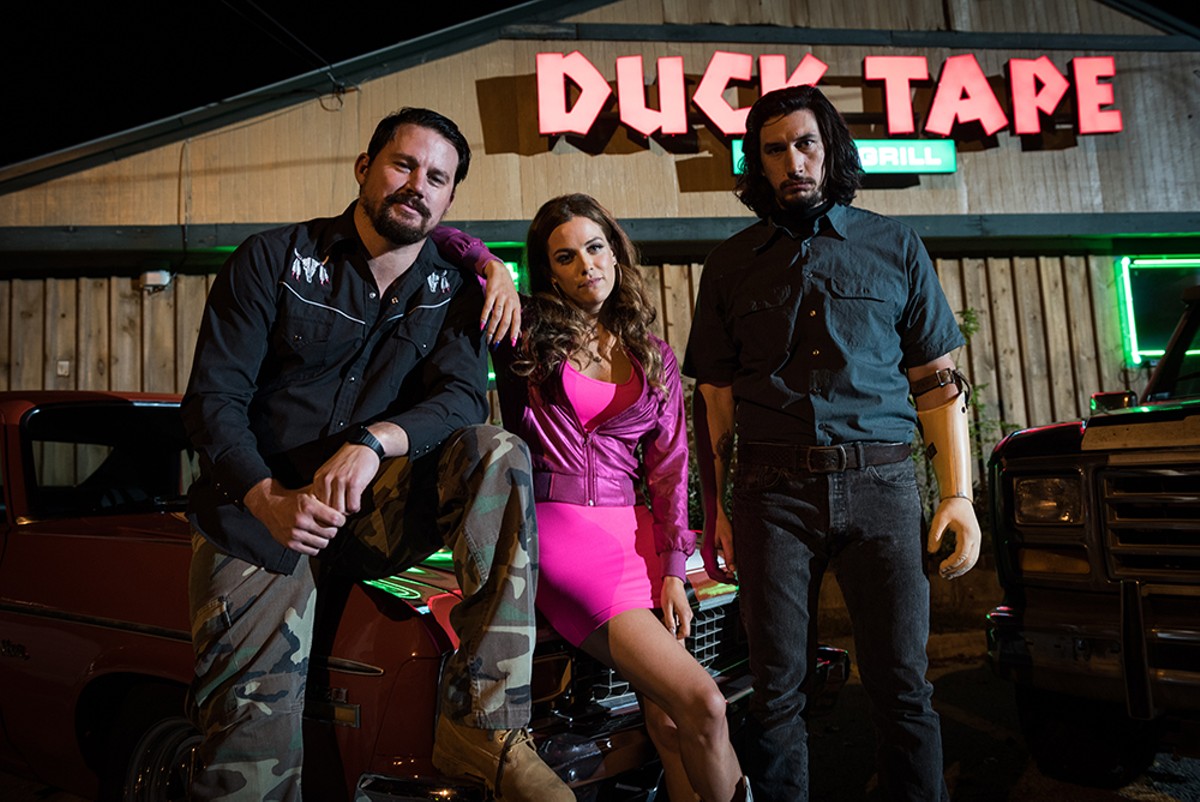 Local NASCAR fans may bristle when they find out that Logan Lucky, the new heist flick from director Steven Soderbergh, takes place at Charlotte, North Carolina's Coca-Cola 600 instead of the obviously superior Daytona 500 just up I-4. Whether that's due to the Florida Legislature's refusal to implement incentives for film production in the state or just poor writing, we can't say. But don't hold a grudge: Logan Lucky is a wonderfully weird heist comedy that deserves a fair shake.

Following the travails of down-and-out brothers Jimmy (Channing Tatum) and Clyde (Adam Driver) Logan, the film takes its name from Clyde's conviction that the family has an unnatural amount of bad luck. Jimmy's promising football career was cut short due to a leg injury that left him with a pronounced limp, and Clyde lost a forearm while on a tour of duty in Iraq. But after Jimmy loses his construction job the same day that he finds out that he's going to need a lawyer to work out a custody conflict with his ex-wife (Katie Holmes), the two brothers, along with not-as-cursed sister Millie (Riley Keough), decide to steal a load of cash from the Charlotte Motor Speedway.

Pulling the elaborate heist off, however, requires the brothers to enlist career safecracker Joe Bang – played by the scene-stealing Daniel Craig, who revels in bleached-blonde redneck criminality – and his two less-than-bright brothers, Sam and Fish (Brian Gleeson and Jack Quaid). The motley crew – a lowbrow version of Danny Ocean's 11 – end up putting together a plan of Rube Goldberg-level complexity, though an ambiguous ending calls into question whether or not they actually manage to change the Logan family luck.

Soderbergh – who took a sabbatical from feature films after 2013's Behind the Candelabra – directs from a script by newcomer Rebecca Blunt (who may be a pseudonym, reportedly), and operates with a penchant for style and rhythm that's undiminished by his self-imposed break. Many of the moving parts of the Logans' plan involve seemingly irrelevant characters – highlights include Dwight Yoakam as a too-proud prison warden and a nearly unrecognizable Seth MacFarlane as a pompous racecar owner – who could have served their purpose as mere sketches, but Soderbergh and Blunt take the time to flesh them out a little more than one would expect, garnering plenty of entertainment mileage from just a few extra minutes of screen time.

Logan Lucky could have easily turned into an example of "liberal Hollywood" mocking rural working-class whites – and we certainly don't need to provide disaffected white males with any more spurious reasons to murder people. But the endearing charm of the characters – along with a plot that teases the audience with just enough information to keep them wondering what's next – makes Logan Lucky a winner.