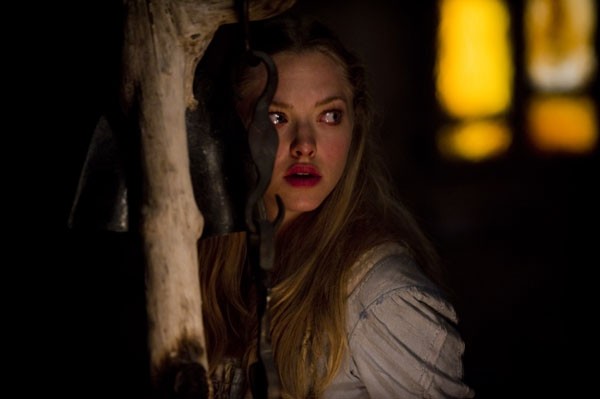 Whether or not it began this way, Twilight director Catherine Hardwicke's adaptation of Red Riding Hood is a kind of test run for a swath of forthcoming movies that retell fairy tales as if Bella and Edward were the main characters in all of them. It's cynical, calculated and typically unoriginal, but as this prototype proves, it's not an altogether bad idea. As folklore, the helpless maiden and animalistic bad boy have always resonated as both cautionary tale and as proxy for adolescent sexual awakenings. With Little Red, we've got a wolf, an innocent girl and some foreboding woods - what more do we need?

Reporting for duty is Hardwicke - she also directed 2003's portrait of teen rebellion, Thirteen - whose broad, painterly storybook visuals and fearlessness in the face of a cheeseball plot make her an almost insultingly obvious choice, and the right one, for Red Riding Hood.

Hardwicke begins with majestic aerials of a fictional village tucked comfortably within snowy mountain peaks and impenetrable woods. There we find Valerie (Amanda Seyfried), the village beauty, who's to marry sweet, slightly cowardly Henry (Max Irons), but she only has eyes for lithe, brooding bad boy Peter (Shiloh Fernandez). When Valerie's sister is murdered by the big, bad wolf, with whom the village has maintained an unspoken, supernatural peace accord, the townspeople decree they must hunt the wolf down. To assist them, they bring in Father Solomon (Gary Oldman), who has made it his mission to seek revenge for his wife who was slain by the wolf.

Despite a creaky start, Orphan screenwriter David Leslie Johnson works matinee magic, contorting the material into an easy bull's-eye for Hardwicke to hit and working in some decent cautionary lessons of his own, such as Oldman's pious, fear-instilling propaganda working too well on a frightened public; the inherent incestuousness of a small hamlet that enables and fuels the panic; winking nods to the story's iconography: stones in the belly, heroic huntsmen, even Valerie's true love's name, Peter, has lycanthropic associations.

While Red Riding Hood never pretends to be anything other than red meat for its ravenous teen base, it's more sturdily constructed than it was required to be, and thus, more engrossing.

Of course, most of the credit for its success must go to Seyfried, whose enormous and lovely eyes are so hypnotic that they're able to support an entire motif of their own. With her porcelain skin and seasoned delivery, you couldn't ask for a more captivating Red. And that may be a problem for Hollywood and its Grimm plans: Vanessa Hudgens, who anchors the Beauty and the Beast remake, Beastly, and Twilight's Kristen Stewart, who is rumored to be signing on as Snow White, can't hold a candle to Seyfried. (Studio updates of Jack and the Beanstalk and Hansel and Gretel are also on their way, injected with considerably more action than the storybooks.)

Hardwicke can take heart, then, that when it comes to post-Twilight romance, it's tough to beat the originator.