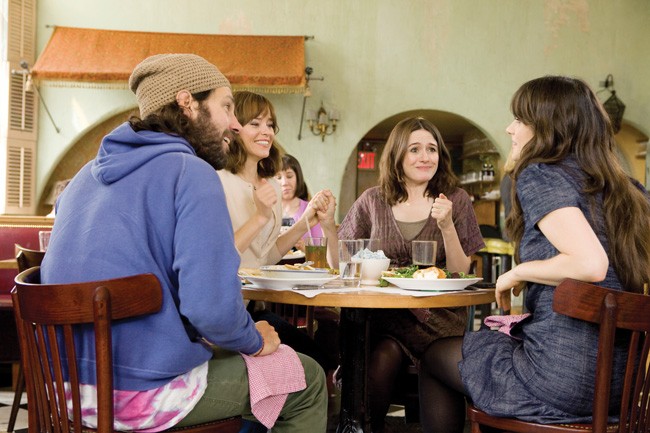 Our Idiot Brother does not entirely work, though it’s not for lack of ability or desire. The film, which stars Paul Rudd as a long-haired, bearded, earthy do-gooder who seems to inadvertently step on every landmine along life’s terrain, bears a palpable, almost sweaty sense of almost-there, a desperate longing to will it to a finish line populated by plaudits and statuettes. Our Idiot Brother, however much even the audience may cheer it on to greatness, is just not built for it.

That’s a surprise, since, on paper at least, its DNA is strong. It’s studded with likable stars: Rudd’s put-upon sisters are played by Zooey Deschanel, Emily Mortimer and a brunette Elizabeth Banks; their respective love interests are equally captivating, from Rashida Jones to Adam Scott (who should be a much bigger star than he is) and Steve Coogan; even the wonderful T.J. Miller and Shirley Knight get in on the action.

Also promising is the film’s production company, Big Beach Films, a shrewd indie boutique whose one-film-a-year track record includes Little Miss Sunshine, Sunshine Cleaning, Away We Go, SherryBaby and Jack Goes Boating, one of my favorite movies last year. [Full disclosure: I was an employee of Big Beach partner Marc Turtletaub once upon a time.]

Even the writers, first-timer David Schis-gall and Evgenia Peretz, and director Jesse Peretz, have fascinating backstories. Schisgall comes from a documentary background, while Peretz, the writer, is a well-known Vanity Fair contributor. Her brother, Jesse, is a former member of the Lemonheads.

With all those interesting people behind and in front of the camera, it’s easy to see why Our Idiot Brother is heavy on situational ephemera but light on narrative thrust. The basic structure – vagabond miscreant waltzes into the lives of fuddy-duddies and changes them forever while himself finding a purpose – is so embedded in the cinematic consciousness that it hardly needs any decoration if the filmmakers were to trust it enough. That’s a big “if,” though, especially with this kind of cast and crew, and so we’re treated to half-satire/half-sincere subplots involving biodynamic farmers, New Agey parents and their constrained-by-liberalism child, a sexually fluid woman facing a pregnancy crisis, an up-and-coming Vanity Fair writer (naturally) struggling with her first meaty assignment covering a charitable royal, a documentarian having an affair with his subject and, of course, Rudd’s borderline autistic ability to talk his way into jail. And there’s a dog, too, named Willie Nelson.

There’s so much to take in that it’s tempting to overlook the fact that the emotional center gets neglected. Rudd’s character is so focused on mere survival – the film begins with his arrest and then cuts to months later, when he loses his girlfriend, the roof over his head, his job and his dog in one fell swoop – that it’s never clear whether he’s invested in the swirling miasma of familial suck constantly surrounding him.

Still, it tries to win us, and when the filmmakers are able to sit in the pocket for a moment, plant the camera on Rudd and any one of his co-stars and just watch … well, magic happens. Like the brother’s wish to de-clutter, I yearned to see the film strip away the layers of stuff and let the guy be himself.