Opening in Orlando: ‘Jersey Boys,’ ‘The Rover’ and ‘Think Like a Man’ 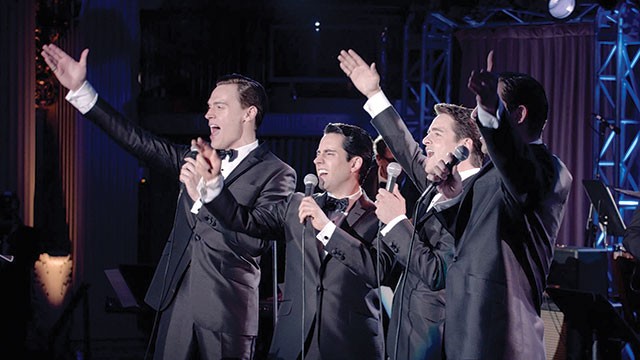 Jersey Boys That little pas de deux with a chair having not worked out the way he planned, renowned song-and-dance man Clint Eastwood turns his attention toward adapting the smash jukebox musical about the career of Frankie Valli and the Four Seasons. If this works, it could be the start of a whole cottage industry: Ben Stiller is a Yeshiva student running for his life from neighborhood bullies Kevin Smith, Jon Bon Jovi, Danny DeVito and Bobby Cannavale in JERSEY GOYS! Mary-Louise Parker is a well-to-do Manhattanite with a taste for Secaucus beefcake in JERSEY BOYS ON THE SIDE! Somebody draw up a poster; we open in Hoboken in three weeks. (R, for “language throughout” – suck it, fans of instrumentals!) – Steve Schneider

The Rover David Michod’s 2010 filmmaking debut, Animal Kingdom, depicted the travails of an Australian crime family. For his follow-up, he’s gone full-bore apocalyptic on us, joining the action 10 years after a complete bottoming-out of the world economy. The setting is still Down Under, and the cast still features Guy Pearce (since nobody in America is gonna pay jack squat to see an Aussie movie that doesn’t include Guy Pearce). But the narrative focus is simultaneously more expansive and more intimate, as Pearce’s character traverses the outback hellscape on a righteous quest to retrieve … his car. Hey, it worked for Mel Gibson, right? (Making movies about a post-apocalyptic Australia, I mean; not having a car.) (R) – SS

Think Like a Man Too Like the book on which it was based, Think Like a Man supplied an answer to one of modern society’s more nagging questions: “Who in the name of all that’s holy would take relationship advice from Steve Harvey?” That settled, we now plunge directly to the bottom of an even more pressing issue: “Who would take relationship advice from Steve Harvey twice?” In Too, a bunch of couples converge on Las Vegas for a multiple wedding, but the temptations of Sin City cause their best-laid plans to go astray. So for those keeping score, that’s one big “NO” to having your nuptials in America’s capital of toilet-derived syphilis and instant personal bankruptcy. Damn, this is some priceless wisdom, playa! (PG-13) – SS

The Fault in Our Stars For the most part, this quirky teen movie succeeds in retaining the charmingly shrewd nature of John Green’s popular book about star-crossed lovers with serious health troubles. Director Josh Boone brightly captures the emotions his capable cast evokes, and even some dull Hollywood plot devices can’t diminish the film’s overall luminosity. The movie will be a memorable cry for many (especially those who will never languish in how slowly the tale unfolds on paper). (PG-13) – Ashley Belanger