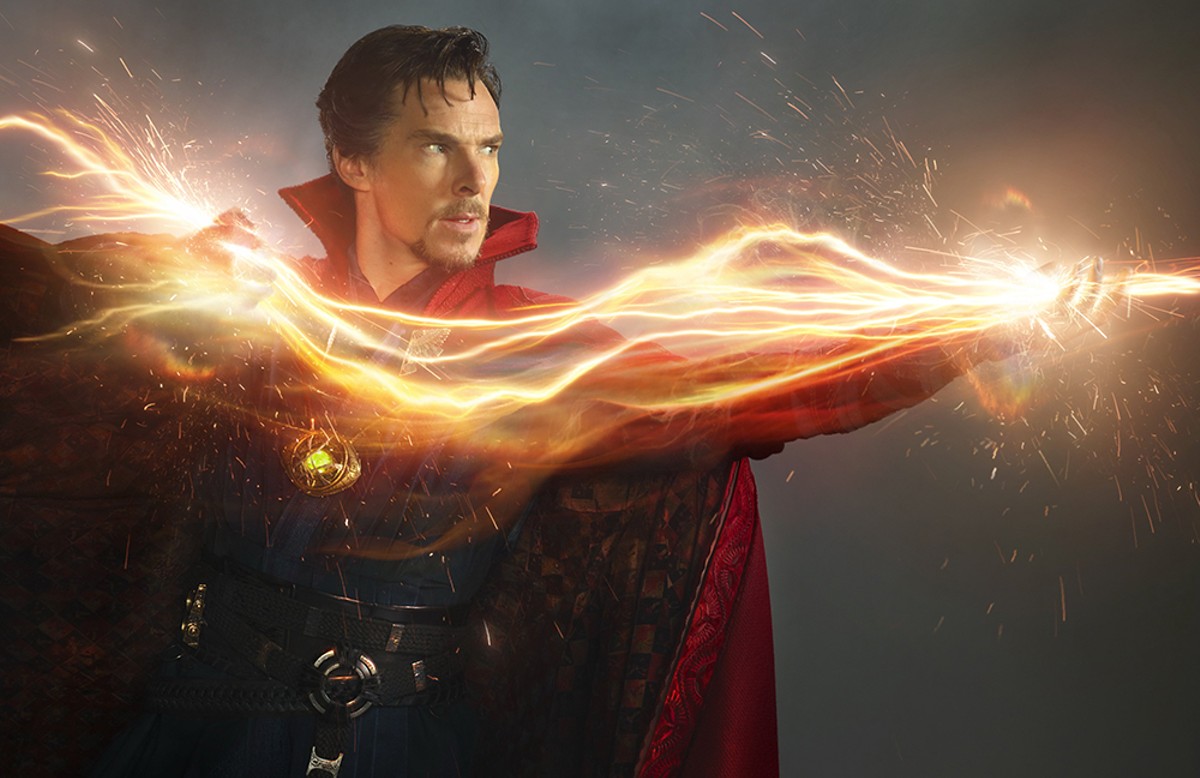 Doctor Strange Or, how I learned to stop worrying and love the Eye of Agamotto. Damn, it seems like just yesterday that the movie business was on pins and needles wondering if it could wring a halfway decent profit out of a second-tier superhero like Iron Man. One Obama presidency and six shellhead outings later, the question now is if the market has room for another goateed Marvel protagonist whose personal path starts at asshole-dom and leads somewhere more virtuous. Those of us who grew up on the comics don't need as much convincing in that area; our main concern is how well the Master of the Mystic Arts can survive the transition from the globular pop art of Steve Ditko's original drawings into a more modern Inception-by-way-of-Escher cinematic style. Trust the perfectly cast Benedict Cumberbatch to make it work, especially with initial reports promising plenty of the humor required to really sell a tale of multidimensional chess. If this be the Marvel "C" team, play on; but can we get that Inhumans movie back on the development slate, please? Because I really need to own a plush Lockjaw the dog before I die. (PG-13)

Hacksaw Ridge At first blush, Mel Gibson might not seem the most logical director for a biography of the first conscientious objector to win the Congressional Medal of Honor. But when you think about it, it starts to make a whole lot of sense: A soldier who refuses to carry a gun is just asking for all sorts of extreme, extended punishment. Hence the movie's R rating for "intense prolonged realistically graphic sequences of war violence including grisly bloody images." That's our Mel! The only sign of inadequate thinking-through is the World War II setting: Our pacifist protagonist's sympathies are with the Allies, which means he is indirectly helping to protect the Jews. Come on, man; don't you remember they're responsible for all the wickedness in the world? I guess a guy has to do something to restart his career. (R)

The Handmaiden That Park Chan-wook, he loves to get under our skin. And this time it's literal, as he transforms a Welsh drawing-room drama into an erotic crime story set in 1930s Asia. A Korean con man conscripts a female pickpocket to help rob a wealthy Japanese woman. Complicating the scheme: some unexpected lesbian activity. (Ain't it always the way?) The graphic sexual activity includes penetration with foreign objects – which I'm assuming is not a reference to the Welsh. (NR) Trolls Dreamworks Animation bought the commercial rights to the famous Troll dolls lock, stock and barrel in order to start developing this animated foray six years ago. Hopefully, they'll get better bang for their buck than Mattel got from Max Steel a few weeks ago. (Yes, there was a Max Steel movie a few weeks ago.) The central conceit of focusing on the most optimistic Troll in history sounds like something that was already done to perfection as a subplot in The Lego Movie. But how cynical can you be about a picture that incorporates voice work by the inimitable Ron Funches? If you've followed his dominance of Comedy Central's @midnight, you know he shouldn't just be starring in every movie that gets made, but titling them as well. Star Wars, But With Fucking? Shut up and take my money! (PG)

Michael Moore in TrumpLand I once had a chance encounter with Michael Moore on the steps of Town Hall in Manhattan during the New Yorker Festival. That anecdote has no relevance at all to this blurb, really; I just couldn't turn down the opportunity to type the whitest sentence in recorded history. Anyway, you have a few more chances to hear Moore make the case for electing Hillary Clinton America's 45th president. And just a few more days to help make it happen. Remember, people, we're stronger together. (There, that's the second whitest sentence.) (NR)

New Life In this family drama, childhood sweethearts discover that married life is more fraught with challenges than they had expected when they were seven. Somebody call M. Night Shyamalan, 'cause I totally didn't see that coming. (PG)