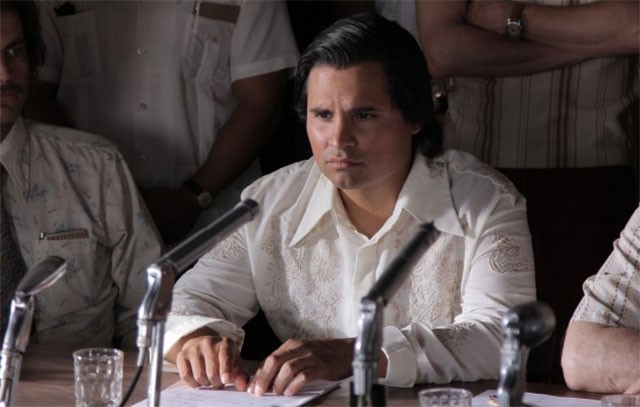 Cesar Chavez Hey, remember Nelson Mandela? He was that guy everybody on Facebook shamed you for not caring enough about when you posted about Paul Walker. Oh, and he also had a movie out right around that time, which let’s just say was in the news for a lot shorter than apartheid. But Hollywood loves a good libster biopic, which is why, just a few months later, we’re getting a profile of legendary grape-hater Cesar Chavez. Michael Peña takes the title role in actor-turned-director Diego Luna’s second feature. And in a supporting role … Paul Walker! (OK, not really. But wouldn’t that be some shit?) (PG-13) – Steve Schneider

Noah Darren Aronofsky was reputedly pissed when Paramount tacked a disclaimer onto his Biblical epic in order to placate members of the religious media who had complained that the picture is not historically accurate. Yes, people are trying to preserve the “accuracy” of the 17th translation of a book that was written when people still got scared if the sun went behind clouds. Among the complaints: The movie portrays Noah (Russell Crowe) loading up the ark with every species of animal, when it’s apparently well known to creationist scholars that he only brought along every basic type of animal. Ohhhhhh, NOW I see. Makes perfect sense … if you believe in evolution, that is. (PG-13) – SS

Sabotage Ex-governor and self-apologist Arnold Schwarzenegger continues the geriatric second act of his showbiz career, playing a DEA agent who finds himself in a sort of Ten Little Indians situation when his compatriots in a key raid start turning up dead. The enforcers of the war on drugs as the good guys? At a time when even Rand Paul is running on the right of the private citizen to bake his brain six ways to Sunday without the feds muscling in? Way to keep your finger on the pulse of public opinion, Arnie. Maybe you shouldn’t have spent so much time with it up the maid’s rear end instead. (R) – SS

The Grand Budapest Hotel If you’re a fan, you’ll dig Wes Anderson’s latest, a delicious feast of color and eccentricity. If you aren’t a fan, the movie won’t change your mind about him. Set mostly in the 1930s in an imaginary European country on the eve of a fictional war, this is a story within a story within a story – on one level an interesting meditation on faded glory, but mostly just a rambunctious rococo romp infused with chapter titles, changing aspect ratios, inspired art direction, funicular railways, downhill ski races, prison breaks and multiple other amusements. It’s style over
substance, but as usual with Anderson, the style is enough. (R) – Cameron Meier