The Mortal Instruments: City of Bones, The World’s End and You’re Next 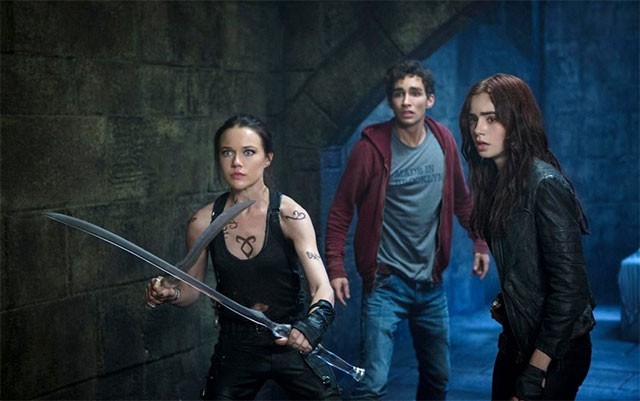 The Mortal Instruments: City of Bones And the search for the next Twilight continues. The first of Cassandra Clare’s supernatural YA novels becomes a feature film, with supporting performances by Game of Thrones’ Lena Headey and Mad Men’s Jared Harris tossed in to entice the oldsters. The starring role, though, goes to Lily Collins, as a teen who discovers that she’s half angel and has to navigate a New York overrun with supernatural creatures. Yes, you read that right: The town Anthony Weiner is desperate
to run is known as the “city of bones.” Now there’s some serendipity for your … weiner. (PG-13) – Steve Schneider

The World’s End The British comedy trio of Edgar Wright, Simon Pegg and Nick Frost make it a triple, following up Shaun of the Dead and Hot Fuzz with a portrait of five aging mates whose attempt to replicate a legendary pub crawl just happens to coincide with an alien invasion. I don’t usually stoop to citing IMDB keywords in these write-ups, but their subgenres for The World’s End include “loss of friend,” “homage” and “reference to the Sisters of Mercy.” Please tell me that’s a thing now. (R) – SS

You’re Next Everybody who said The Purge was a ripoff of The Strangers can just sit on a rocket and do twirls. Here comes You’re Next to remind us that the fear of having your home invaded by homicidal maniacs didn’t begin a mere 11 weeks ago. (Actually, it can be traced all the way back to the founding of the Avon corporation.) This time, it’s a wedding anniversary that provides the occasion for unexpected domestic mayhem, which shows that anniversaries can be hell even when you don’t forget them. Helpful tip for art-horror heads: Keep your bloodshot eyes peeled for an appearance by cult director/actor Larry Fessenden. (R) – SS

Also playing
Prince Avalanche Writer-director David Gordon Green’s minimalist comedy starts as a remake of the Icelandic film Either Way but becomes more like Waiting for Godot, with Paul Rudd and Emile Hirsch as Texas road workers who are incapable of embracing the reflective isolation their job provides them. It’ll be interesting to see if American audiences will adjust to the slow and deceptively simple rhythms Green follows as he takes this familiar story of accidental bromance and subtly inserts metaphors for loss and regeneration. Green sometimes bobbles the tone and focus, lurching from deadpan comedy to self-indulgent navel-gazing to underplayed ghost story. (R) – Jeff Meyers