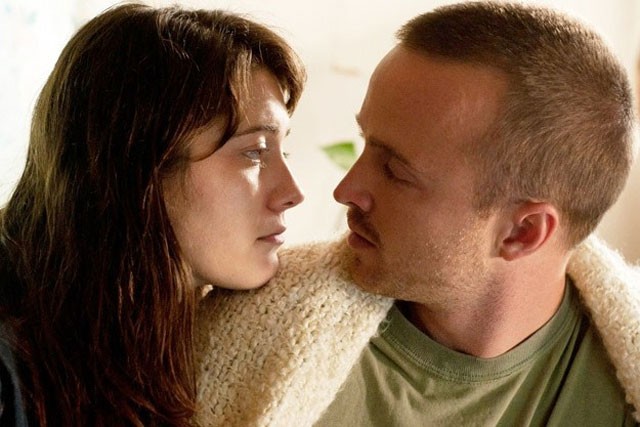 Smashed What happens when half of a hard-partying couple decides to get sober? Well, the other half is suddenly responsible for a tremendous amount of olives, for one thing. But the strain on the relationship doesn't end there, as this alkie domestic drama seeks to illustrate. Some serious substance-abuse pedigree went into the making of Smashed: Star Mary Elizabeth Winstead was in Factory Girl, and her onscreen hubby, Aaron Paul, is of course one of the leads in Breaking Bad. As for writer/director James Ponsoldt … well, his other feature, Off the Black, was not only likewise about the subject of alcoholism, but starred Nick Nolte to boot. That's like taking Sunday-school class from the Pope. (R)

The Twilight Saga: Breaking Dawn – Part 2 Then again, let's not forget that addiction isn't the worst thing that can happen to young marrieds. What if your offspring is a human/vampire hybrid whose very existence threatens the status quo of the entire undead community? (Hint: Sending her to a charter school will not help.) Such is the setup of the should-be-last of the Twilight movies, which follows the Harry Potter model of splitting its literary blueprint into two separate cinematic cash cows. But that may not even be the end of sparkly bloodsuckers on screen, given Robert Pattinson's joking suggestion to Ellen DeGeneres that another film might be coming in which his character would turn gay. Laugh it up, R-Patz: With the way your personal life has been going recently, you might indeed be better off with Taylor Lautner. (PG-13)

The Man With the Iron Fists Wu-Tang Clan co-founder RZA stars as a (hope you're sitting down) 19th-century Chinese blacksmith who crafts weapons with which to defend his village. And which astute talent scout took a look at RZA and said, "I see 1800s Asian craftsmanship just rolling off this guy"? Look no further than the credits: "Directed by RZA." (R)

SkyfallThe 23rd entry in the Bond canon is easily one of the best. Director Sam Mendes re-energizes the franchise by grounding the movie in real-world concerns while still embracing the spectacular action scenes, beautiful women and exotic locales things that have always made 007 so appealing. The story is surprisingly character-driven, boasting thematic forays into betrayal and mortality. It's an exciting yet melancholy actioner that isn't afraid to deepen the man behind the myth. (PG-13) – Jeff Meyers

Wreck-It Ralph Disney's sendup of classic arcade tropes has a career villain yearning to play the good guy for once. Just don't get any ideas about piloting Canadian aircraft, Ralph. (PG)