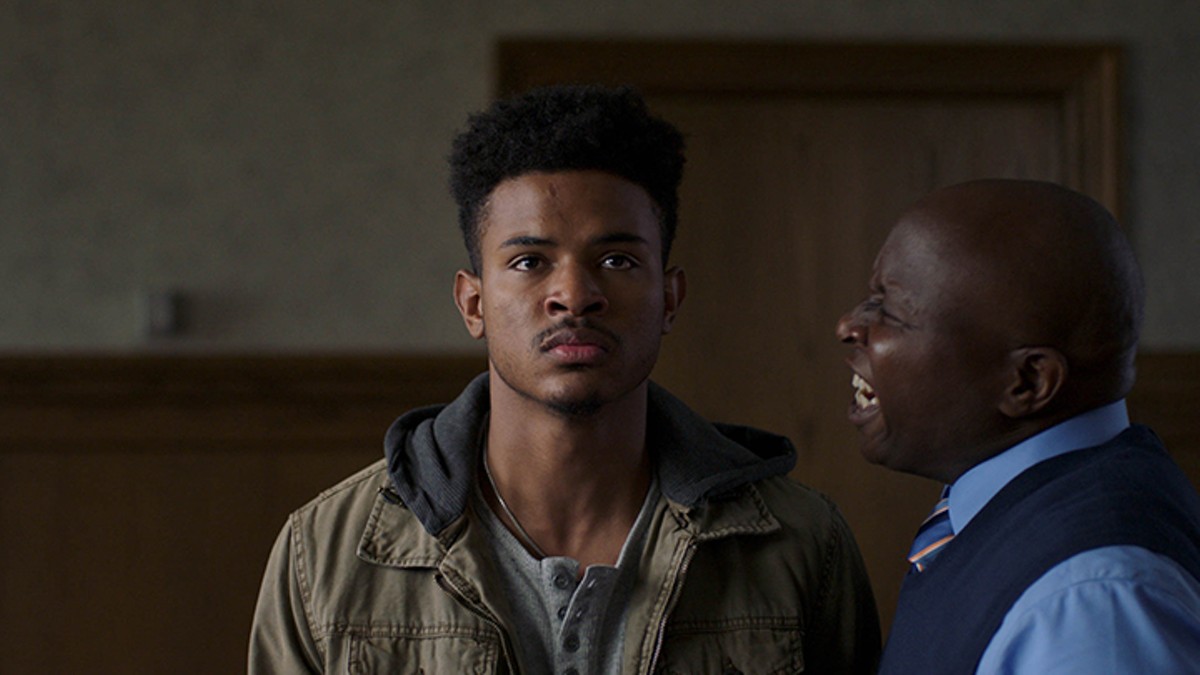 Burning Sands
Streaming on Netflix Friday, March 10
★ ★ ★ ★ ☆
On Nov. 19, 2011, Robert Champion, a 26-year-old drum major with Florida A&M’s famed “Marching 100” band, died of injuries sustained in a hazing ritual in Orlando, Florida. His death, coming mere hours after the annual Florida Classic football game between Florida A&M and Bethune-Cookman College, resulted in the suspension of the Marching 100 and the resignation of the band director and university president. Those who followed the story, particularly as the brutal details of the hazing itself came out, were left wondering why anyone would voluntarily subject themselves to that kind of abuse.

Burning Sands, the debut feature film from director and co-writer Gerard McMurray, while not in any way a depiction of the Florida A&M hazing, aims to address those questions. McMurray, who joined Omega Psi Phi at Howard University, has already garnered the ire of plenty of HBCU Greek organizations for the gritty depiction of life as a fraternity pledge during “Hell Week” at the fictional Frederick Douglass University. Whether the type of hazing depicted in the film is accurate is hotly debated, and probably varies widely, but one merely has to look at the Robert Champion case to see that hazing – in some form – persists.

For McMurray’s part, he does an admirable job trying to balance depictions of the kind of abuse aimed at five pledges – led by the conflicted Zurich (Trevor Jackson, in a noteworthy performance that makes him a young actor to keep an eye on) – with subtle justification for why these young men would want to join such an organization in the first place. The treatment is cruel and arbitrary, yes, but that shared experience creates strong bonds between the pledges, not dissimilar to the bonds formed between people in the military or police. And the truth is that being a member of a fraternity will create opportunities for these young men to become leaders in their communities after graduation.

Not just the namesake of the university, Frederick Douglass is quoted extensively throughout the film, particularly the line “If there is no struggle, there is no progress,” from an 1857 speech commemorating the emancipation of West Indian slaves. Here, the quote applies as much to the efforts to remove dangerous hazing from college campuses as it is to Zurich and company’s efforts to put themselves through a crucible to see what kind of men they will be on the other side.

For the most part, the script handles this dichotomy – objectively wrong acts being committed with good intentions – deftly. Only during a scene between Zurich and the dean of the college, a member of the fictional Lambda Lambda Phi frat that Zurich is pledging to, does the editorializing of the director peek through. While the dean, played by veteran character actor Steve Harris (The Practice, Friday Night Lights) commiserates with Zurich’s struggles with pledging, Zurich retorts by pointing out that criminalizing hazing only pushed it underground and made it more dangerous – a fair point, certainly, but slightly out of character for the otherwise omerta-abiding Zurich.

Bolstered by strong performances from the ensemble cast, including Oscar-nominated Alfre Woodard (Luke Cage) as a sympathetic professor – along with a keen visual style that makes effective use of moving cameras to put the viewer in the middle of frat life – Burning Sands is compellingly watchable, even if its all-too-predictable climax is telegraphed for half the movie. It may not be a definitive look at the HBCU Greek experience, but it succeeds in being a nuanced look at the problem of hazing on any college campus.