‘Beyond the Lights,’ ‘Dumb and Dumber To’ and ‘Kirk Cameron’s Saving Christmas’ 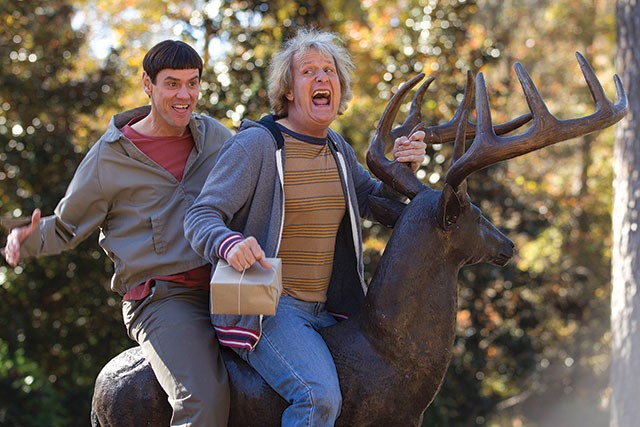 'DUMB AND DUMBER TO'

Beyond the Lights And now it’s time to add two new entries to my running list of Things White People Can’t Do: 1) vote for decent candidates; 2) distinguish this movie’s trailer from the promos for that Lifetime Aaliyah biopic. Either way, we’re gonna see a lot of bling and bubbly as an idealistic up-and-comer gets an education in the shadier aspects of the urban-music economy. NOTE: “Urban” is what you call a product when you’re counting on selling it to black folks but would really prefer not to have to stop there. So dig in, Scandal Nation! And tell all your friends on the crew team! (PG-13)

Dumb and Dumber To In which Hollywood learns the belated but vital lesson that making a Dumb and Dumber movie without Jim Carrey, Jeff Daniels or the Farrelly Brothers is like … well, like making a sequel to The Mask without Jim Carrey. And what kind of dope would have attempted that? This time, the misadventures of the triumphantly idiotic Harry and Lloyd are again presented by their true and rightful interpreters, with the ousted Derek Richardson and Eric Christian Olsen free to breathlessly anticipate their appearance as a Jeopardy question 15 years from now. We’ll only have to worry that the Farrellys are running out of steam if they announce Dumb, Dumber, Dumbassed, featuring Ted McGinley as slow Cousin Oliver. (PG-13)

Kirk Cameron’s Saving Christmas From the title, you’d assume this was another Bill O’Reilly-esque screed against the alleged “War on Christmas” (i.e., the crippling indignity of having to admit that Jews and Muslims do not cease to exist at midnight on Dec. 24). But it’s actually some sort of homespun narrative in which washed-up kid-star-turned-professional-God-botherer Kirk Cameron teaches his own family the true meaning of the season. Wait – shouldn’t they know it already? Has Kirkie been so focused on saving the souls of strangers that he’s let the home fires burn out? Next thing you know, one of them is gonna join ISIS. (PG)