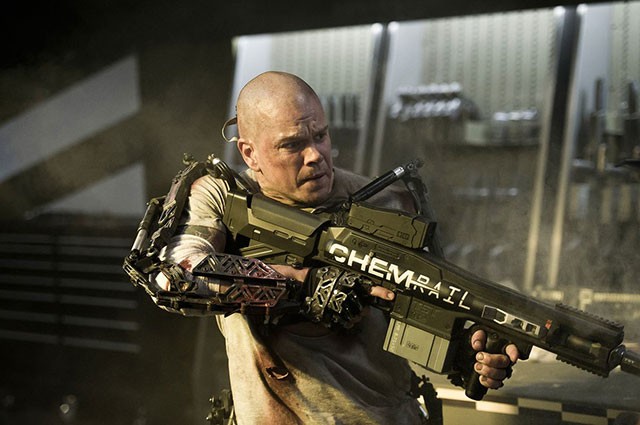 Blue Jasmine The desperate New York housewife (Cate Blanchett) at the center of Woody Allen’s latest film is being compared to everyone from Blanche Dubois to Ruth Madoff – which means that even if you long ago gave up on the Woodman as a purveyor of quality art, you might wanna check this one out anyway, just for the “nailing Jell-O to a wall” angle. Speaking of pleasing incongruity, the supporting cast includes Louis C.K., who is a recognized comic genius at the apex of his career, and Andrew Dice Clay, who is … not. (PG-13) – Steve Schneider

Disney’s Planes “From above the world of Cars,” reads the pitch for Planes. “And below the quality of Pixar” would be a fitting finish to that slogan, as Disney has released essentially the same film it did in 2006 and 2011, this time with less driving, more flying, worse music, bad voice-overs and an embarrassingly juvenile script. Kids will get some enjoyment from this upbeat, fast-paced 3-D adventure about an underdog achieving his dreams. Adults, however, will quickly tire of this derivative film – one that was originally planned for DVD only and should have stayed that way. (PG) – Cameron Meier

Elysium Having earned an Oscar nomination for allegorizing South African apartheid in a science-fiction context with District 9, Neill Blomkamp tries the same trick with an even more stratified society: modern-day America. It’s a battle between the haves and have-nots as the luckless inhabitants of a burned-out Earth yearn for the space-station paradise floating above them. In charge of that exclusive community is Jodie Foster – which, given her attempt at the Golden Globes to distance herself from the filthy lower-class likes of Honey Boo Boo, seems like almost effortless typecasting. (R) – SS

We’re the Millers Now that even Mitt Romney has recognized he isn’t going to be president, Jason Sudeikis is free to cut Lorne Michaels’ apron strings. The first step in Sudeikis’ path to world domination is We’re the Millers, a shock comedy in which he plays a pot smuggler who retains a “family” of lowlifes (including Jennifer Aniston) to bring a shipment up from Mexico undetected. Meanwhile, Rep. Steve King wants to know why they’re all so pale and their calves are so flimsy. (R) – SS

FilmSlam '13 If you’re tired of the overly polished blockbuster and have already seen Fruitvale Station and The Way, Way Back – two of this summer’s best – you may need a dose of FilmSlam. The monthly program of short movies returns to the Enzian Theater in Maitland at 1 p.m. Sunday, Aug. 11, and for just $5 you get a smorgasbord of treats – some tasty, some nauseating, but almost all memorable – from up-and-coming Florida filmmakers. This month’s installment features seven offerings, including Our Town, from Kathleen Bossart and Michelle Brown, about kids who witness a murder in a small town; Rich Belsan’s Vann, which postulates whether a single flaw is enough justification for dumping an otherwise great guy; and The Door, a psychological thriller by Randy Larioz. A Q&A with the filmmakers follows the movies. – CM