What’s playing on screens around town: ‘Riddick,’ ‘The Grandmaster’ 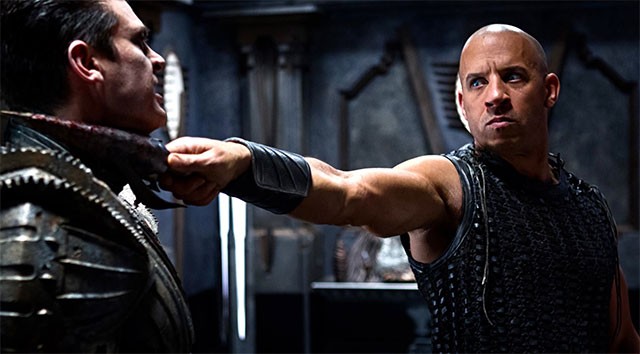 Riddick Vin Diesel. David Twohy. Katee Freakin’ Sackhoff. You’ll want to see this deep-space threequel at midnight if you can, just so you can say you caught it on Throwback Thursday. Or maybe Flashback Friday is just as appropriate, since everything about the flick seems like a time capsule of what the aughts thought the teens were going to look like. To be fair, Diesel’s participation in the unaccountably deathless Fast and Furious franchise sort of qualifies as “having a career,” though it’s telling that the big takeaway from the Riddick promo tour is that fanboys are really looking forward to hearing his voice work as a talking tree in Guardians of the Galaxy. Oy. Meanwhile, even Riddick cultists are whining that the Diesel/Twohy axis’ third effort is looking and sounding too much like 2000’s Pitch Black, which started it all. And when a
tepidly anticipated installment in a franchise that’s never cleared 60 mil at the box office is the weekend’s only wide release, what does that tell you? It tells you that the boys of summer are gone, Don Henley. (R) – Steve Schneider

Also playing
The Grandmaster This epic stab at the life of the legendary martial-arts master Ip Man bears all the extravagant style that perfectionist filmmaker Wong Kar-Wai can muster, but it suffers from a sketchy biography that lurches along without rhythm. Mostly set between 1930 and 1952, the movie follows Ip Man’s (Tony Leung) years in Foshan, the loss of his family and fortune during the second Sino-Japanese War and his eventual self-imposed exile to Hong Kong, where he became a renowned teacher of the likes of Bruce Lee. The approach to history is elegiac and the fight sequences exaggerated, filled with the kind of gravity-defying wire work featured in wuxia films. Unfortunately, the film’s jarring edits end up baffling the narrative (perhaps because the version The Weinstein Company has released is a two-hour edit of a rough cut that was reportedly more than four hours long). Leung’s strangely all-knowing voice-over is clearly meant to provide contextual glue to the sprawling start-stop story, but it’s a clunky and unenlightening attempt to connect the dots. What remain to be savored are the film’s sumptuous visuals and bravura fight sequences: Expertly orchestrating motion, texture and an endlessly vibrant spectrum of light and color, Wong composes an astounding visual symphony. Hopefully, he’ll one day release a more definitive version that honors his breathtaking cinematography and gorgeously stylized action sequences with a biography that’s equally engrossing. (PG-13) – Jeff Meyers