Elizabeth Olsen storms the screen in a ferocious debut 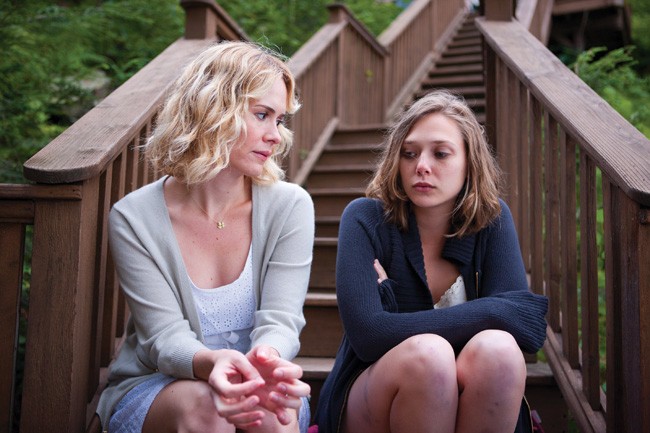 With its minimalist texture, deeply felt direction and the sounds of folk musician Jackson C. Frank – as interpreted mournfully and beautifully by MVP actor John Hawkes – wafting from the woods of a remote, gothic compound in the Catskills, Martha Marcy May Marlene is easy to love and impossible not to admire. That’s also true of the film’s breakout star, Elizabeth Olsen, sister of Mary-Kate and Ashley, whose soul-piercing eyes, bee-stung lips and whose character choices seem as if they were trudged up from a hidden reservoir within her broken heart formally announce that her sisters’ names won’t have to be mentioned alongside hers for much longer.

Olsen stars as the title character who goes by any number of alliterative names for a variety of reasons: Martha is her given name and how her older sister (Sarah Paulson), Lucy, refers to her when Martha, who has just escaped from years of seclusion in a cult led by Hawkes’ Patrick, rings her up asking for immediate help. Once in the relative safety of Lucy’s and her husband, Ted’s (Hugh Dancy), sprawling vacation home in Connecticut, we learn via flashback that she was renamed Marcy May by Patrick. (Marlene seems to be a generic title of sorts for whoever the compound matriarch is at a given time, though it’s not made entirely clear.)

The film tells Martha’s story by cutting back and forth between Lucy and Ted’s cartoonish upper-class opulence and Patrick’s survivalist lifestyle, which recruits pretty young girls to keep house for the men, care for the babies and wait their turn to eat dinner until after the men have all finished. Throughout, we see far more than Martha ever tells. That leads to some motivational confusion in the second act ; while Martha’s odd behavior, withdrawn yet at times uncomfortably open, remains a complete mystery to her sister and brother-in-law, the audience is privy to too much. We understand how people like Patrick sucker these people in: On the surface, his compound is a place of music, resourcefulness and purpose. In the darkest corners, however, monstrous indoctrination occurs with the crucial assistance of the other women.

Likewise, Martha Marcy May Marlene is a mighty achievement on the surface, a festival smash boasting a debut actress well on her way to an Oscar nomination that’s already made back its relatively small budget. Writer-director Sean Durkin is an unquestionably talented new player on the scene, as well. Martha looks great, even when Durkin’s lens isn’t (wisely) trained solely on Olsen’s luminosity.

But the film has major structural problems: The aforementioned mystery doesn’t play at all. We’re meant to roll our eyes when Martha chides her brother-in-law for his materialism, yet Durkin’s script hammers them for it in its own immature ways. It’s impossible to believe that a couple this modern – if there were a soundtrack to speak of in their lavish home, it would certainly be along the free-jazz/NPR lines – wouldn’t instantly escort Martha’s sullen ass to a team of psychologists and medical doctors in the city, even taking into account Martha’s refusal to talk about where she’s been the last couple of years. Therapy is eventually a conversation, but it’s too much of a stretch to think it wouldn’t be the first conversation.

Similarly, the flashback device breaks down entirely whenever Martha leaves the compound. We haven’t spent nearly enough time with her cult family to identify them outside those confines (let alone in the dark), and that leads to nearly fatal confusion. During one lengthy stretch of the film, I had no clue whom I was watching, where they were or what they were doing. An utterly baffling, abrupt ending that answers nothing only compounds the coldness. Since my viewing of the film, I’ve seen Durkin and his producers attempt to sell these shortcomings as intentional misleads meant to take us inside Martha’s scattered mind, but I’m not quite convinced it wasn’t simple sloppiness.

I should also say that I’ve seen many films this year with open endings that I felt fully satisfied by, including Meek’s Cutoff, Another Earth and Take Shelter. I’m not a person who needs things wrapped in a bow. But Martha doesn’t require any parlor tricks, not when it features such a rare gift in Olsen – an actress who speaks volumes with barely a sound.