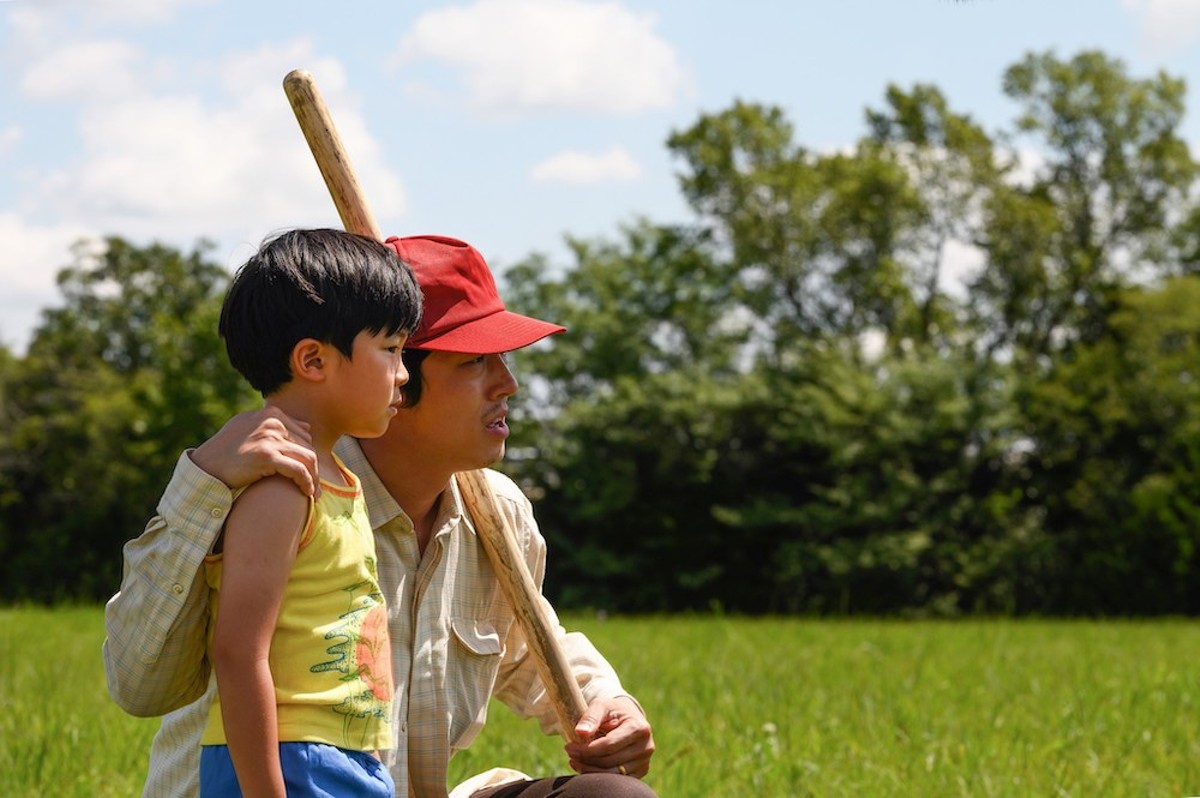 Alan Kim and Steven Yeun in 'Minari' Photo courtesy A24
MINARI
streaming on demand Friday, Feb. 12, at a24film.com and enzian.org
4.5 stars (out of 5)

Recent conventional wisdom — perhaps in an attempt to preach diversity — proffers that the American Dream is different for each of us, but I'm not buying it. In my mind, native-born Americans and immigrants alike still strive for the classic goals of free expression, respect, home ownership, a successful livelihood and the right to raise a family in the manner of their choosing. Those are the key ingredients in our national melting pot.

Writer-director Lee Isaac Chung would seem to agree. In Minari, he spins the emotional tale of a husband, wife, daughter and sickly son who move from Korea to Arkansas in the 1980s to gain a sense of self-fulfillment and prosperity. Before settling in the appropriately nicknamed Land of Opportunity, Jacob and Monica Yi drudged out their existence in a California chicken-sexing hatchery. The factory required them to sift through thousands of newborn birds, dumping females in one bin and males in another. Jacob had bigger goals for his family, but, sadly, he and his wife ended up doing identical work after moving to Arkansas.

"What's that?" Jacob's son, David, quizzes his father upon noticing the factory's smokestack billowing death into the air like an ornithological Auschwitz. "Male chicks are discarded there," Jacob reluctantly yet introspectively responds. "Male chicks don't taste good. They can't lay eggs and have no use. So you and I should try to be useful."

And thus Chung posits the film's central metaphor: a man in a foreign place, struggling to stay relevant in his own eyes and those of his wife, who is bitterly skeptical of his ambitious plans to farm the land they have purchased. The plot might seem a bit on the nose, but with Chung's pitch-perfect screenplay, Emile Mosseri's gentle score and the best acting ensemble of the year, Minari is unforgettable. It's also arguably the best movie of 2020 — it got a limited release last year — filmed primarily in a language other than English. And although the Golden Globes honored it with a nomination for foreign-language film last week, it will not be eligible for an Oscar for best International Feature, thanks to the Academy's weird rules. (Entries in that category must be produced outside the United States.) Let's hope it will instead be nominated for best overall film, in addition to lead actor (Steven Yeun as Jacob), lead actress (Yeri Han as Monica), supporting actor (Will Patton as a fascinatingly odd but loyal friend) and supporting actress (Youn Yuh-jung, as Monica's mother, in the movie's most memorable role).

The film's title, another of Chung's metaphors, is a nod to an edible Asian plant. "Minari is truly the best," Monica's mother tells her grandson. "It grows anywhere, like weeds. So anyone can pick and eat it. Rich or poor, anyone can enjoy it and be healthy." Regardless of your own diet, you'll be healthier for watching this film.