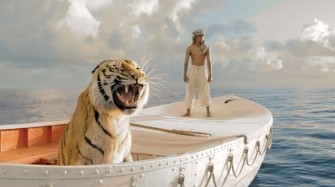 You will not see a better-looking film this year. But you will undoubtedly see better films.

If ever there were an aesthetic case to be made for 3-D film, Ang Lee's Life of Pi is it. Lovely beyond words and taking full advantage of the extra dimension (almost a necessity given that two-thirds of the film takes place on the water), the celebrated director (Brokeback Mountain and Crouching Tiger, Hidden Dragon) has composed a film filled with astonishing lyrical beauty and grandiose magical realism. Whether it's a swimmer traversing the crystal clear waters of a Parisian pool or the violent waves that crash and surge during a typhoon, the audience is immersed in water, confronting its unforgiving depths, endless expanse and utter tranquility. Compound that with glorious schools of flying fish, the leap of a colossal blue whale, and an evening sea aglow with bioluminescent jellyfish and you have the makings of a singular cinematic experience.

Pi (newcomer Suraj Sharma) is short for Piscine Molitor, a name too easily turned into "pissing" by cruel classmates. The Indian boy, who is the focus of Yann Martel's celebrated novel, is the son of a strict secular father and gentle Hindu mother, an interesting mix of spiritual influences. Still, the ever-inquisitive Pi hasn't found the religion that suits him best, so he begins to dabble in Christianity and Islam as well. When India's economic fate becomes uncertain, Pi's father decides to move the family zoo to Canada. A catastrophic storm hits the Japanese freighter Pi's family has booked passage on, sending the zoo, crew and loved ones to the bottom of the Pacific. Amazingly, Pi is tossed into a well-stocked lifeboat, along with an injured zebra, an orangutan, a hyena, and a Bengal tiger improbably named Richard Parker. As you might expect, this unlikely mix of passengers doesn't last long, with those at the top of the food chain — Pi and the hungry tiger — becoming incompatible shipmates.

For 227 days the adolescent boy and the deadly cat endure an odyssey that tests their ability to survive. Food, weather, isolation, thirst and nature's brutal indifference become lethal challenges as Pi plays a dangerous game of king of the hill on the boat with the tiger. Yes, the story is episodic, but in its middle, mostly wordless section Lee masterfully weaves together the transcendent imagery, emotional stakes and thematic elements into a tour de force of filmmaking.

The seeming endlessness of the Pacific Ocean is captured in both its serene grandeur and stormy fury. When the freighter sinks, Pi hangs suspended underwater, watching as the massive ship sinks, its light still glowing as it disappears into the depths. When the waters are calm, it becomes a fantastic canvas for sunsets, marine life, and the eternity of a starlit heaven.

Dramatically, however, Life of Pi fares less well than its visuals. Lee and screenwritier David Magee not only rely on the most trite of framing devices – author Martel interviews the adult Pi (played by Irrfan Khan) hoping to hear "a story that will make me believe in God" — but let the men's banal exchanges undo the film's spell, pulling us out of the adventure in order to deliver yet another needless bit of narration or spiritually didactic dialogue. Even my 10-year-old son complained that the intrusions ground an otherwise thrilling tale to a painful halt.

This comes to an unfortunate head in the film's final, and somewhat condescending, third act, as the thematic underpinnings of Pi's tale are made explicit, verbalized so that even the dimmest viewer will understand the film's thesis on storytelling and faith.

Lee's high seas saga has no shortage of big ideas, using both magical realism and a Book of Job plotline to reconcile Pi's relationship to God and form a symbiotic relationship with nature's impossible beauty and profound volatility. But since it's been made clear that the boy doesn't answer to any one god, the movie allows each audience member to walk away satisfied with whatever truth best affirms their faith.

It's a cozy, humanistic approach that, to some, seems to absolve Lee of taking sides in a world that has become dangerously divided over religion. But I see a sly flipside to Life of Pi's spiritual parable, one that implies that religious truth is irrelevant, that faith, at its foundation, is merely shaped by stories, and you simply pick the yarn you like best. Whatever his ultimate intent, one thing is clear: Ang Lee worships first and foremost at the altar of cinema.