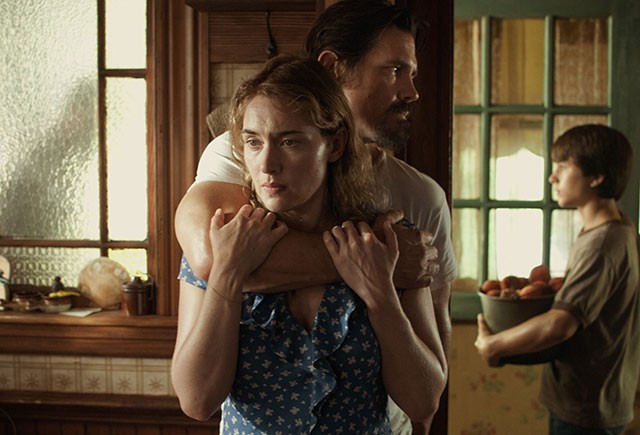 Ladies! Single? Lonely? Starved for human touch? Why not get yourself kidnapped and held hostage by an escaped convict? Guaranteed relationship starter!

I kind of couldn’t believe that this is where Labor Day goes. And I’m kind of dumbfounded it does so without the teensiest sense of irony or even a hint of awareness that this could be problematic. Stockholm syndrome as actually, genuinely romantic? Are they kidding?

They are not kidding.

It’s Labor Day weekend in 1987, and single mom – and very likely clinically depressed woman – Adele (Kate Winslet) is shopping with her young teen son Henry (Gattlin Griffith) when they are approached by Frank (Josh Brolin). From the middle of a busy store, this large, shifty man, suspiciously bleeding from a wound in the gut, kidnaps Adele and Henry and forces them to take him to their home. “I fell out a window,” he says to explain the bleeding. He proceeds to tie them up, as you do when you’re an escaped convict who needs a place to hide out. Later, Frank makes breakfast, does some handyman jobs around the house and generally engages in enacting a parody of husbandness. Also later, after some untying, Adele starts gazing at Frank in a horrifyingly besotted way, and – clearly suggestible as she is – begins to call her son “Hank,” as Frank has been doing.

Writer and director Jason Reitman, adapting a novel by Joyce Maynard, sincerely expects that we will find all of this terribly romantic. In case there’s any doubt that Reitman is being straight with us – because he is generally better known for snark such as Young Adult and Thank You for Smoking, and some sort of contempt for the regressive attitudes on display here is desperately needed – we are treated to a voice-over narration by adult Henry today (Tobey Maguire), who relates these events for us while slathering them all in a gooey nostalgia for that time when he and his mom got kidnapped by an escaped convict and his mother fell in love with the guy.

I’m so not kidding.

Why is it Labor Day? In order to throw a sexy sweltering haze over everything, of course. Oh my goodness, it’s so hot in here with the kidnapping and the tying up and everything! But it’s not just sexy for Adele, it’s all-American for Henry, too. Everybody wins when you get taken hostage! What boy wouldn’t want to spend the last weekend of summer playing baseball in the yard with a menacing father figure? (This actually happens.) Mom even makes a peach pie for them all to enjoy. Reitman’s not willing to go as far as apple pie, so at least we know what he considers too ridiculous – Stockholm syndrome as romantic? Totally fine. Mom, baseball and apple pie? Don’t be absurd.

Of course Winslet and Brolin are amazing. But that only makes Labor Day even more horrifyingly wrongheaded. This isn’t cheesy sensationalistic crap we’re dealing with here. It’s elegant awards bait – Winslet was nominated for a Golden Globe, for the love of human bondage – which is totally fine if you want to make falling in love with your violent kidnapper look gorgeous and appealing.