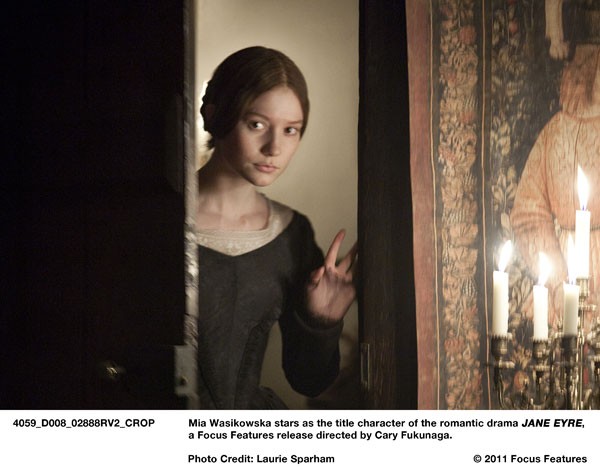 Charlotte Brontë's 19th-century masterpiece, Jane Eyre, has already been filmed nearly 20 times for screens big and small, so what more can possibly be said about this well-worn gothic romance? Not much, apparently, but at least director Cary Fukunaga's version is superfluously good - an elegant, classicist picture of quality with just enough sinister gloom darkening its romantic edges.

At just two hours, Fukunaga had no choice but to capture only the gist of Brontë's more than 400-page text, hitting most of the bullet points and some of the Cliff's Notes while neglecting the nuance of, say, the BBC's five-and-a-half-hour miniseries. Problem is, Jane Eyre is hardly the kind of story you can rush through. We don't see nearly enough of Jane (Mia Wasikowska, Tim Burton's recent Alice) as a prepubescent punching bag, suffering constant and unendurable physical and mental cruelty at home and at her boarding school. Those who have not read the novel may wonder what all the fuss is about - why Jane has grown into a humorless, emotionally frigid young woman with more reservations  than Delta.

Instead, Fukunaga plunges us as quickly as possible into the central love story between Jane, who has graduated from school and found employment as a governess in a mansion, and Edward Rochester (Michael Fassbender), the estate's irascible master. Sexual tension is Fukunaga's favorite and most exploited emotion; he thickens it in scenes not just between Jane and Edward, but between Jane and her distant cousin  St. John Rivers (Jamie Bell), with whom she will  eventually reside.

Some of the scenes have a horror-film urgency; flash cuts jar us with jolting imagery, strange whispers pepper the soundtrack and things occasionally go bump in the night. But it should be said that, despite a trailer that plays up the story's terror, genuine scares are scant. If spirits do lie within the film's dark, gaslit chambers of secrets, as they do in the pages of Brontë's text, they're awfully quiet onscreen.

Fukunaga's translation most purely connects with Brontë's words in his casting of the leads. He doesn't glamorize their anatomies, and he didn't cast  heavily made-up Hollywood stars in Oscar-baiting prestige roles. As Jane, Wasikowska is an awkward beanpole dressed in unflattering raiment - striking in her utter plainness - and Fassbender's brusque Edward, with his pronounced sideburns, is no Romeo. The film also retains the book's strongest message as a proto-feminist tract, underlining Jane's strength and defiance.

Brontë's florid, baroque English, filtered through Moira Buffini's screenplay, sounds as beautiful as ever, though the emotions it conveys will not go over well with all audiences. At the screening I attended, many in the room laughed, with apparent derision, at moments of total seriousness, an insulting misinterpretation that says more about the maturity level of the peanut  gallery than it does about Brontë's/Buffini's words or Fukunaga's honest, sensitive direction.