Movie about Charles Dickens’ mistress Ellen Ternan may hold your attention, but not your imagination 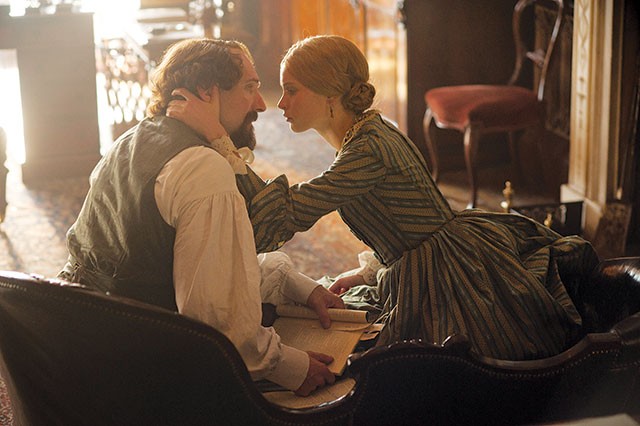 For his sophomore directorial effort, Ralph Fiennes has brought to the screen the scandalous but mostly secret relationship between literary legend Charles Dickens, whom he plays, and his young mistress, Ellen “Nelly” Ternan. It’s a beautiful and melancholy tale told in a deliberate, intelligent style but, regrettably, lacking in urgency and passion thanks to writing and performances that often keep us at arm’s length.

The Invisible Woman, with a screenplay by Abi Morgan, is based on the book of the same name by Claire Tomalin. It’s largely speculative, as no letters between Dickens and Ternan survive, but whether all details are accurate matters little, as the ambience, historical tidbits and performances are realistic enough to hold your attention. But that’s as strong a compliment as the movie deserves; the revelation of the hearts and minds of Dickens and Ternan seems just out of reach of Fiennes’ film.

Set both during the height of the alleged affair (around 1860) and in 1883 as Ternan is pondering her past (13 years after Dickens’ death), the film avoids the trappings of a traditional biopic. Indeed, it focuses more on Ternan than Dickens, which is refreshing at times. Yet by avoiding a more predictable story arc, it too often leaves us in the dark on details, exposition and motivations. The result is a movie that lives in the shadows, more haunted than haunting, and never fully present.

Fiennes is somewhat believable as the legendary author, though his performance is, well, nothing to write home about. Felicity Jones, as Ternan, is also sporadically effective and even visually mesmerizing in close-up. Both actors are held back, however, by a screenplay absent in energy and on-screen chemistry sans spark. Too often they simply go through the motions, content to let the sumptuous cinematography and art direction tell the tale for them. Only Joanna Scanlan, as Dickens’ tragically rejected wife, completely connects.

“This is a tale of woe. This is a tale of sorrow.” Those lines are spoken by Ternan in a play directed by Dickens, but they are also used to sum up the film. An even more effective literary reference is the comparison of Dickens and Ternan’s relationship to the strangely uplifting yet ambiguous ending of Great Expectations, in which Pip “saw no shadow of another parting from” Estella. The Invisible Woman tries to capture the magic of that 1860 masterpiece, but it just can’t, perhaps because it’s written not by the master himself but by a writer known for the only slightly above-average screenplays for Shame and The Iron Lady.

Fiennes is a competent helmer, and though this film is not as powerful as his first foray into directing, Coriolanus, it will intrigue not just Dickens fans but most period-piece enthusiasts. It may even touch you with its dreamlike style – except that this is someone else’s dream, and we never feel fully part of it, which ironically means that Ternan, who stayed largely invisible for 150 years until the publication of Tomalin’s book, is destined to remain so.