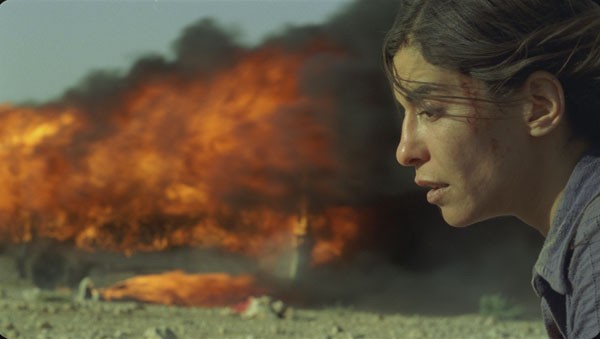 Director Denis Villeneuve opens his latest film, Incendies, with a routine scene in which a recently deceased mother's twins, Jeanne and Simon, are read her will by a trusted notary. There are tears, keepsakes and, of course, disappointments - that last part seems an inherent part of drafting a last testament. This one, however, is a doozy, one that will send them to Lebanon, their mother's home country. There, they are to seek out their father and their brother, neither of whom the twins knew existed (and neither of whom their mother names in the will - thanks, Mom!), and hand them sealed letters from their late mother. All of this will bring about truth, which will bring about love and break the chain of anger that defined their mother's life.

It's a mighty challenge, and one that certainly has no guarantee of success, but considering the strength and determination that laid within their mother, Nawal (Lubna Azabal as a force of nature), she must have known that her daughter, Jeanne (Melissa Desormeaux-Poulin) would get to the bottom of it.

Villeneuve begins with Jeanne's journey, in which she encounters long-standing familial grudges and survivors, like her mother, of the Christian militia's slaughter of Palestinian refugees in the 1980s. They all have an instinct to bury the past, especially those years, which really gets in the way of Jeanne's mission. Eventually, we flash back to Nawal's story, one of forbidden love, shame, prison, rape, torture and the birth of her twins and those three's escape to Canada. (The language alternates between French and Arabic.)

Along the way, Jeanne, who is eventually joined by her reluctant twin brother, Simon (Maxim Gaudette), assembles the pieces. Villeneuve's direction is sumptuous, more full and sensual than Middle Eastern films usually strive for. There's also a mischievous hint to the second-act thriller thrust, a Kill Bill-esque revelry to the non-linear storytelling that's only reinforced by the occasional blood-red location cards. Villeneuve knows when to hit the gas and when to apply the brakes, for the most part.

I qualify that last sentence for this reason: The climax, in which the envelopes are read and the truth is revealed, is meant to shock us. But the built-in resolution is one of, well, reading a letter. For a film that has told us everything about their mother through her actions, it's anticlimactic to end her story with just her words.

Still, there is great beauty and great sorrow in Nawal's story and Villeneuve and his actors do it great justice.