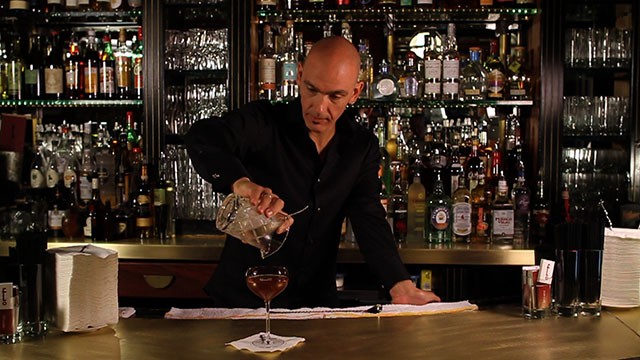 Director Douglas Tirola launches his latest documentary portrait of a subculture with a quote from legendarily hard-drinking journalist Pete Hamill: “The culture of drink endures because it offers so many rewards: confidence for the shy, clarity for the uncertain, solace to the wounded and lonely, and above all, the elusive promises of friendship and love.”

It’s an apt-enough epigraph for this film, though Hamill was referring to the punters paying for drinks, not the barkeeps behind the stick. But it turns out that the reasons for making a vocation of mixing cocktails – or even just slinging drafts – are the same: to bolster self-identity; to gain clarity of purpose; to soothe wounds, whether psychic or physical; to get laid.

Tirola presents a two-hour entrée into the world of “mixology” today – the revival of the creatively conceptualized mixed drink and the creatively mustachioed practitioners of the art. Hey, Bartender comprises interviews with most of the big names in cocktails working now, from wise elder Dale “King Cocktail” DeGroff to Dushan Zaric, rock-star owner of Greenwich Village boîte Employees Only

Tirola follows the personal journeys of two very different bartenders. Stephen “Carpi” Carpentieri, owner of a roadhouse in Westport, Conn., provides the Everyman balance to the masters and mistresses of cocktail arcana; while they’re buying $1,000 Japanese ice-sphere molds, he’s hauling plastic garbage cans from the ice machine to the dump bins at his beer-and-a-shot neighborhood hang. His introduction to this other realm at the annual Tales of the Cocktail conference in New Orleans is refreshing and endearing, and offers the only window of fresh air into the cloistered clusterfuck of mixologists.

The other featured subject is Steve Schneider (not to be confused with our film critic of the same name), a young ex-Marine attempting to move from apprentice to principal bartender at Employees Only. Schneider, whose military career was cut short by traumatic brain injury, is the young face of obsession in Hey, Bartender. His fanatical devotion to his workmates, employers and the isolated bubble world of mixology mirrors perfectly any Marine’s devotion to the Corps; he’s simply replaced one with the other.

Schneider says he “died in a bar, was reborn in a bar” – the three plates in his skull didn’t come from the battlefield, but from a back-alley bar fight. And that touches on one failing of this film. There is no mention made of alcoholism, drunk driving or any of the adverse effects of drinking. The “art” that every bartender here reveres encompasses some danger, but zero attention is paid. That Pete Hamill quote at the open of the movie was from the first page of his memoir A Drinking Life – a book in which he charted the damage alcohol did to his life and why he “finally left it behind.” Yet this side of the nightlife and hospitality industry is strictly ignored.

Documenting a subculture for a larger audience requires filmmakers to find ways to explain the jargon and doctrines, as well as explaining the relevance or larger significance of that subculture to culture as a whole or else the film merely preaches to the choir, and Hey, Bartender does. The film never transcends its inside-baseball vibe, making it most probably a hit and a significant achievement among people already interested in cocktail culture, but unlikely to grab those who couldn’t care less about the difference between a smash and a flip.