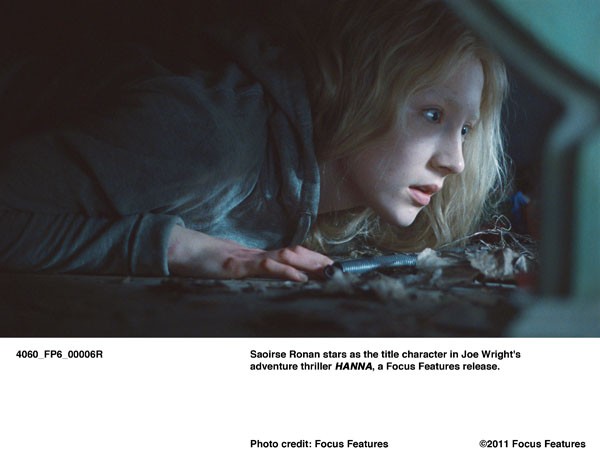 Talk about a lost childhood. We first meet teenager Hanna, played by Saoirse Ronan, expertly stalking a deer through the pitch-white woods of Finland. Her father (Eric Bana) sneaks up, gets the drop on her and they fight violently, only barely pulling their punches. This is the norm for them, we learn: Secluded from mankind by design, Hanna has lived her entire life in her ex-CIA father's rigorous training program. She's fluent in many languages, with a heightened sense of awareness and Jason Bourne-like martial arts knowledge. She's eager to leave home and take on her life's mission, which seems to also be her father's: to get revenge for the murder of her mother, apparently at the hands of a scheming research director (Cate Blanchett). Hanna flips the switch on a long-dormant homing beacon and the game is on.

It's a bizarre new avenue for director Joe Wright, previously known for Pride & Prejudice and Atonement, and one that doesn't always fit him like a glove. As Hanna and her father make their way to a checkpoint in Germany - she spends the majority of her screen time in Morocco befriending a free-spirited white couple attempting to expose their spoiled kids to a broader worldview - Wright  luxuriates in the picturesque settings, each new horizon another opportunity to see things through Hanna's fresh gaze. It's at these moments, when Hanna tastes true freedom for the first time in her life, that the film is at its best.

Wright knows enough to fix his camera straight ahead on Ronan's otherworldly face. Despite having already been nominated for an Oscar, Ronan's presence feels like a revelation. Her skin glows like diamonds, her movements spindly and extraterrestrial, her eyes like an abyss injected with knowledge and possibility. Watching Ronan in Hanna is like seeing Hedy Lamarr for the first time: One wonders from what experimental lab she came from.

It turns out that's not far from Hanna's truth. Unbeknownst to her, she has "abnormal" origins, which is where Blanchett's character comes in. But any time Wright cuts to Blanchett's pursuit of Hanna and her father, the film becomes airless. It's as if the celluloid itself mourns Ronan's absence. Blanchett's arch, ridiculous take on Marissa, the agent who will stop at nothing to eliminate Hanna and her father, does not help.

There are, besides Ronan, too many bright spots, however, to prevent the movie's success, especially Olivia Williams as Hanna's de facto maternal figure and Tom Hollander (In the Loop) as a flamboyant evil henchman. Hanna's straight-laced, inventively visual style, however much in service of a flimsy plot and the somewhat flightless momentum, is always interesting. Wright fails big but succeeds bigger, so long as we're watching Ronan, whose performance is the first great one by an actress this year.