Guys with guns, girls with guts

The Coen Brothers’ newest Western is their most old-fashioned yet 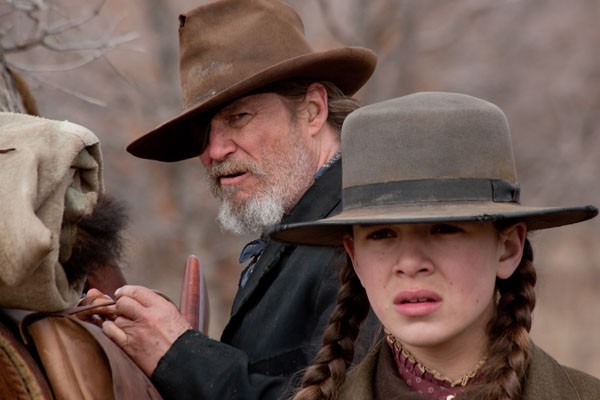 And who better to pursue the wicked than a 14-year-old girl? Mattie Ross (newcomer Hailee Steinfeld) has been left fatherless after a drunken and belligerent Tom Chaney (No Country’s Josh Brolin) shot Daddy down in cold blood. Since no one can be bothered to chase him down and bring him to justice, she decides to hire the toughest U.S. Marshal in town, one-eyed Reuben “Rooster” Cogburn (Jeff Bridges), and then follows him into the Choctaw nation to find Chaney before a Texas Ranger by the name of LaBeouf (Matt Damon) can haul him back to Texas to punish him for crimes there.

The Coens adhere much closer to Charles Portis’ novel than the 1969 adaptation could claim to, relishing the era-appropriate  language as if it were their own tongue (Rooster’s “been known to pull a cork”) and imbuing the proceedings with a romantic, ultimately melancholy sense of adventure. As shot and scored by Roger Deakins and Carter Burwell, respectively, the ambience is unsurprisingly gorgeous and grand. Better yet, Bridges fills John Wayne’s boots well – perhaps even better than the Duke did – portraying Cogburn as the morally shaky but awfully determined man that he is. Matching him beat for stubborn beat is Steinfeld,  giving a terrifically tenacious debut performance and holding her own opposite both outdated language and a considerably  capable cast.

The brothers also develop the film’s dynamic  into something more interesting than simplistic surrogate father-daughter relationships. Mattie claims that she’s looking for a man with the eponymous quality, but what she really wants is a man who can do what she can’t. Cogburn’s killed many white men, kicked many Indians and even robbed a bank, and maybe half a dozen different life choices prevented him from being the very man that Mattie is hunting down. If Rooster is what Mattie might have become – a sour agent of so-called justice – then Chaney is what Rooster himself might’ve been, a walking temper with a quick trigger finger and little conscience to bear.

The violence, once it erupts, is terse but bloody. Thankfully, the humor is much more constant, especially as an insecure LaBeouf tries to compete with and compare to a young girl and an old buzzard; Damon acts his part well, every bit as inflated, defeated and determined as his co-stars. Brolin plays the big bad Chaney as a sad sack more in line with many prior Coen protagonists than antagonists. Barry Pepper is unrecognizable and just right as “Lucky” Ned Pepper, gang leader to Chaney and an old foe of Cogburn’s.

In many ways, the Coens’ newest Western is their most old-fashioned yet. It’s got good guys hunting down bad guys; it’s got the good sense to know just how close any man (or girl) is to being one over the other.