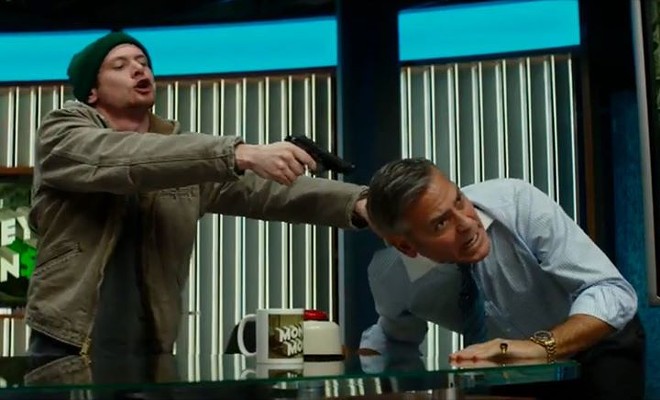 Irate investor Jack O'Connell asks financial TV-show host George Clooney where all his money went.
Some films are ruined by an accumulation of minor mistakes. Others make one or two major errors that doom an otherwise competent effort. Money Monster is the latter type.

The financial thriller directed by Jodie Foster and starring George Clooney, Julia Roberts and Jack O’Connell actually makes three of them. First, its misplaced (and mostly failed) attempts at humor turn what might have otherwise been an edge-of-your-seat suspense film into a tonally challenged shrug fest. Second, a third-act decision (which reveals something to the audience that should have been kept secret until the final scene) sucks out even more tension. Third, and most destructive, is the decision – spoiler alert! – by the writers to make the villain not the system itself, but a single person we don’t really know and don’t care about.

But let’s back up. Clooney is Lee Gates, the host of an ostentatious and just plain inaccurate financial-advice show. Think Jim Cramer (of Mad Money) meets Rush Limbaugh, with dancing showgirls. Even the show’s co-producer (Roberts) admits, “Hell, we don’t do journalism. Period.”

Into this odd mash-up of spectacle and pretend-news steps Kyle Budwell (O’Connell, in the film’s best performance), a regular working stiff who saw his entire inheritance wiped out when a supposed computer glitch erased $800 million from the value of the company in which he invested (IBIS Clear Capital). He wants answers, and he’s willing to storm the show’s studio – with a loaded gun and bomb vests – to get those answers on live television. Specifically, he wants them from both the CEO of IBIS (who was scheduled to appear on the show that day) and Gates, who had promised viewers that IBIS was the investment equivalent of the Rock of Gibraltar.

It’s an intriguing, if slightly tired, premise. After all, we’ve seen similar (and more effective) examinations of financial corruption in The Big Short and Margin Call, not to mention sharper indictments of systemic greed in intellectual thrillers such as Network and The China Syndrome. However, the film that Money Monster most wants to mimic is Dog Day Afternoon. But while the latter classic stripped its story bare (with no music or frenetic visuals) to produce almost total authenticity, Money Monster takes the opposite path: optical bombardment, an overbearing score, plot twists that stretch credibility, and actors and filmmakers who seem at times to be phoning it in. (There’s even a snarky, wisecracking cop thrown in for B-movie measure.)

Foster can’t resist inserting moments of parody and ridiculousness. One assumes she is using these to comment on the immaturity and short attention span of society. And I enjoyed her homage to The Truman Show, when we see viewers casually returning to their foosball game seconds after watching real-life tragedy unfold on their televisions. But because these moments lack finesse, we laugh at the movie, not with it.

Despite the film’s flaws, it’s almost rescued by its brisk pace, its relatable subject matter and the charm of its lead actor. It’s not bad enough to prompt a downgrade of Clooney and Foster, but I still recommend you sell.